Just two months ago, Barnet Labour swept the board in the Council elections in Barnet. All manner of unfunded promises were made. Newly elected Leader, Barry Rawlings announced that after sixteen years of neglect, residents were facing a new dawn and that the time had come to put the council "back on the rails". Outgoing Tory Leader Richard Cornelius said "I wish the Barnet Labour Party well, we are handing them a council with robust finances, good schools and great services. As a Barnet resident, I can only hope that they don't throw away all the good work we've done over the last sixteen years, righting the ship after the previous period of Labour misrule".

It hasn't taken long for the Good Ship Barnet to hit the rocks under the incoming Labour regime. All of Labours promises of better services have gone up in a puff of smoke. A massive funding crisis has hit the council. It has only taken the Labour Party two months to announce that a massive raid on the reserves is required, simply to keep the council afloat this year! Whilst all committee's were reporting that finances were "but manageable" under the Tories, under Labour they have not taken long to implode. A £7 million drawdown on reserves had been agreed under the Barnet Tories. This has now spiralled to £21 million in a mere two months of Labour misrule.

The council audit has just been released and in a mere two months, the Council has deteriorated from being "reasonable" to being "limited". We knew a Labour administration would be a catastrophe, but we didn't realise that the Titanic that is Barnet Council would sink quite so quickly. 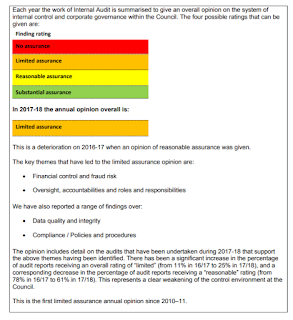 Sadly in this Universe, there is no getting away from the fact that the cock ups are all down to the Tories in Barnet