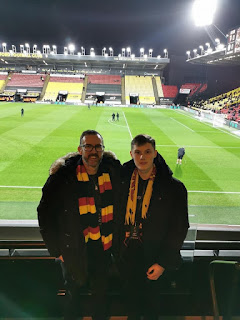 I am in bits this morning. I just read a tweet that made me cry and with the sun shining, has made the world seem a better place. Let me tell you the back story. I used to manage a band in the 90's called The Sway. The bad boy of the band was a guy called Paul Hogan (not the Aussie comic!). Paul had serious problems with alcohol and he won't mind me saying he wasn't always a pleasant drunk. Having said that I had a soft spot for Paul, he was a good guy who was I always felt kept the band together and ticking, although he was perhaps the least musical. After many years of problems, Paul kicked the booze a few years ago. He realised that it was damaging his family and ruining his life. He retrained and got into teaching to put something back. Paul got into running and despite growing up an Arsenal fan, on moving to Watford, found a new love with the Hornets, which he bonded with his son Aiden over. I am immensely proud of how Paul has turned himself around. His wife is the daughter of a friend of my Dad's, Vic Evans, a gentleman who originated from Burma and ended up a stalwort of the Mill Hill Community.

A couple of weeks ago, Vic passed away. Paul has recently been hit by health issues (nothing to do with alcohol). He was getting back on his feet when this awful blow struck. Normally I would have paid my respects to Vic, but this was impossible. Just as Paul was coming to terms with this blow, his mum passed away.

A glimmer of pleasure, a boxing day football match, has been snatched from us. Last 2 months, I've fallen seriously ill, my father in law died & we had his funeral last week. Just over a week ago my mum died & we have her funeral this week. This pandemic is more than just covid.

In these times there is little we can do to support our friends in these times, other than post a few messages of support on Facebook. However, there are some who can do a little more, they don't have to, but they can.

One such man is Troy Deeney, the inspirational Hornet legend. To Paul and my surprise, he posted this

Hey Paul sorry to read this message,condolences to you and your family 💔 not sure if this helps but will be happy to give you my tickets for tomorrow nights game if that at all helps? Please let me know if. https://t.co/TSU8CmtlSz

That in itself brought a tear to my eye, but the messages of support that followed are amazing. Hats off to Troy. I hope Aidy gets along and Watford smash it tonight. One day, a long way off in the future, Paul and Aidy will still be recalling Troy's kindness at their darkest hour. This is perhaps the best Christmas story you'll hear this year!

The even better news is that both Paul and his wife Jenni went with Aiden and for a couple of hours, their problems were lifted, as the picture shows. Hats off to Watford for laying out the red (or should I say Yellow) carpet

Here is a video we made back in the day when Paul was a rockstar. I love the song but I love the family man Paul has become even more.

This is a great song featuring Bass guitar by Paul, from 1994, we made the video as a sort of art house short film. It features the amazing vocals of Helen Terry on backing vocals. He is a talented bloke. And hats off to Troy!

Email ThisBlogThis!Share to TwitterShare to FacebookShare to Pinterest
Click on Labels for related posts: Paul Hogan, The Sway, Troy Deeney