We are celebrating the 25th anniversary of the conception of the Barnet Eye blog next week. On the 20th March 2007, I sent an email to Phil Crowther, who was then the editor of the Barnet Times, suggesting that I write a column in the paper, featuring local music, bands and artists. I said that I felt that this would bring a new, younger readership to the paper and also help local bands to raise their profile. I reminded him of the columns by Kevin Black, Joy Bentley and Clarence Mitchell, that did just that in the early 1980's. I heard nothing. Six months later, I emailed again. I again heard nothing. I'm not one to give up. Three months later (now we are in March 2008), I sent another follow up. To my amazement, I got a reply almost immediately. The answer intrigued me. He said that he couldn't give a slot in the paper for music, but he'd be more than happy for me to become one of their new 'community bloggers'. This meant they'd give me my own page on their website.

I didn't know what a blogger was, odd though that may seem now. My interaction with social media had been a few songs on Myspace and an entry on Friends reunited. So I did what I always do. I reead up on how to be a successful blogger. The website I looked at gave me three golden rules. 1. Post as often as you can. 2. Post about stuff that interests you and you have something to say about. 3. Post things that no one else is saying. I'd 100% intended to simply blog about music. The first blog I wrote was about the dangers of systemic insecticides in the growing of skunk weed on 23rd June 2008, which got little response, as did the second that was about local music festivals but by a strange quirk of fate, the second or third day I started, something a local politician said riled me. I wrote a rather ssarcastic blog, saying exactly what I thought of him. It didn't occur to me that anyone actually read the blog. I'd not posted it on Twitter (as I wasn't even aware of Twitter) or Facebook. Next thing I knew, the blog had dozens of comments and was top of the 'most read articles' table on the website.

This created a momentum of its own. I realised that there was a whole lot of people out there who wanted someone to voice what they were thinking about our local council and it's esteemed councillors. I also learned that the local Tories are a bit thin skinned. Coleman got his PR guy at the GLA to ring up and try and get the offending blog removed. Phil Coleman made the classic error of telling me this. He didn't and thought it was hilarious that (in his words) "A blog read by five people had caused such a stir". I thought it was hilarious. Even more so when I realised that the Times had set my permissions up incorrectly and I could do anything I wanted on their website. I would never breach the trust of Phil Crowther, but I could see the stats and far more than five people had read the blog.

The whole thing inspired me. In October, the Tories running Barnet Council threatened to pull the advertising on the Barnet Times if they didn't give me the boot. This was the papers main source of income and they duly capitulated. Brian Coleman and his henchman Robert Rams reputedly went for a drink to 'celebrate the end of my blogging career'. As I'd never really considered myself a blogger in the first place, this amused me. It may surprise newer readers to learn what happened next. Former local Tory bigwig, son of Baroness Hendon and chair of Friern Barnet Conservatives David Miller was outraged. He saw this as a Stalinist attack on free speech. David agreed with many of my comments about Barnet Council, if not my politics. He persuaded me to set up the Barnet Eye blog and publish the blog that had caused the Torys to lose the plot. You will have to wait until Monday to read that story!

I assumed that no one would read the Barneteye. I called it that as a play on 'Private Eye'. The full name is |"99% is.... The Barnet Eye".  This confused many people. They assumed it was because I stood with the 99% rather than the 1% who rule us. It was nothing of the sort. It was an in joke. There was an obscure punk rock song called 99% is Sh*t by the Cash Pussies. Apparently one of our local Tories told Crowther that 99% of what I wrote was just that and they wouldn't stand by and let me get away with it. I doubt any of them got the joke.

For the first six months or so of the blog, I wasn't really interested in whether anyone was reading it. I knew that if no one was, I'd get demoralised and give up. So I didn't look. When eventually I did, to my amazement, I'd had 60,000 views. I realised that I was doing something right. I had no idea that I'd actually achieve anything by writing the blog. I was wrong. Next week I will be picking my five greatest hits as a blogger. I've been giving this a lot of thought. Barnet needs bloggers. You can achieve things if you put your mind to it.

It's Friday, so here is the Friday Joke. Have a great weekend! 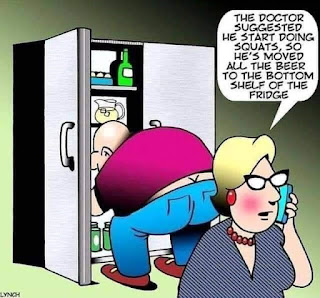