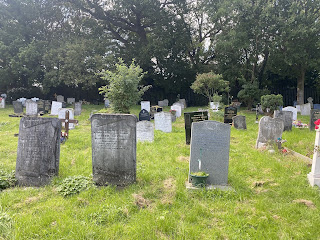 I guess the true measure of whether I will ultimately judge my blogging efforts to have been a worthwhile use of my time, is if I can say that I've actually made a small difference to someone's  life when they needed help and didn't know where to turn. When I started writing the blog I had few expectations that this would really be possible. I mean, who reads a local blog about the Barnet and actually learns anything useful? The moment I realised that I'd completely underestimated what you could achieve what can be done with a few words happened about six months after I first published a blog entitled "The practical guide to watching someone die" on the 24th April 2012. I wrote the blog a few days after watching one of my best mates die of cancer. Although both my parents passed away when I was an adult, I was not around in either case, as they died unexpectedly. When Paul died, we were there with him through the process.

The hospital told us he'd pass in a matter of hours. In the emotional devastation of the aftermath, I realised I'd been completely unprepared for the whole experience, both emotionally and practically. I wrote a blog, whilst it was still fresh in my mind, detailing what I should have done to prepare for the experience. No blog has had the same pattern of views. Every day it gets 10-20 and has risen to be the third most viewed blog on the Barnet Eye. The only two more viewed went viral and have humungous amounts of views, but have probably not had a view since the month after they were published.

About six months after I wrote the blog, I received a letter from someone I'd never met, on the other side of the country. She sent me a cheque for £500 and said "buy yourself a holiday or donate it to charity as you please. Your blog got me through an impossible experience. Just knowing someone else felt like that and felt so powerless was something that made it just about manageable and the information was invaluable. I have passed it on to all of my friend. Please acknowledge that you received the cheque" and gave a phone number. As I always do at such times, I felt like a fraud and a charlotan. The last thing I wanted was for someone to send me some money. I thought "Christ, if they knew what an idiot I was they'd be embarrassed". But as it was a kind gesture, I thought I'd better ring up and say thank you.

When I rang, I introduced myself and was greeted by a Lady who could hardly talk. She was in floods of tears. I asked if it was a bad time, she said "Every time is a bad time, please talk to me if you can manage it". So I did, well I didn't really. I just listened to her talking for an hour. She was clearly quite distraught and rambling away. After an hour, she said "Someone is at the door, I better go". It really troubled me. I genuinely didn't know what to do. After about a week, I was feeling horrible about the whole thing. I thought I'd better ring just to see how she was. I was very tempted to return the cheque.

I rang and it was like speaking to a different person. She was polite and friendly and very apologetic for being so upset the previous week. There was a good reason, it had been the anniversary of a key date with the person who had passed and she'd been drinking. She said that she was very touched that I called back. I said that I really appreciated that she'd sent the cheque, but it was totally unnecessary. She replied "Well if you feel better, give it to a charity, but it would make me happier if you spent the money on a treat, as I really wanted to thank you for your efforts. If you were local I'd buy you and your wife dinner". So I said "Well ok, I'll take her out to dinner on you and the rest I'll give to MacMillan.". Which is exactloy what I did.

She then told me that she'd been distraught when she read the blog and had found it by googling. It had been the only article that she could really associate with and that it was a massive help. She then reassured me she was OK. It hadn't really occurred to me that a few words would be so important to someone. Over the next few years, I'd get emails every six or so months from people saying that they'd really been helped (no others contained chaques, something I am quite pleased about). In 2018, I got an email from someone else, who worked with a bereavement charity. She asked if I could speak to her. I rang and she explained that someone had pointed her at the blog and she wanted permission to use parts of it in material they were sending out. I said "use it as you see fit, I'd appreciate a credit". She then asked if I wanted any sort of payment. I didn't. She then said "There are a few things you might want to consider adding". I asked her to send an email, which she did.  In September 2018, I did just that.

It was suggested that I may like to write a book on the subject, but I declined. I'd have loved to do it, but I wrote the blog when it was raw. Try as I may, I couldn't really think of anything to expand it. I was just pleased that I did something and it made a difference to a few people. I think that often such blogs are actually better than 'proper books and guides' as they are often more raw and immediate.