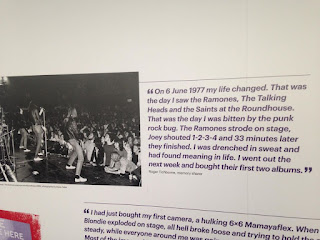 The Dingwall venue was comprehensively revamped when Vince Power took over around 2000. The new venue is nice enough but it doesn't feel the same. The old Acedemic Press warehouse has now been redeveloped and is flats. The Camden Palace became Koko and then burned down. Happily it is rising from the dead like a Phoenix, but not as the rather grotty but wonderful Music Machine. In truth, Camden was a bit like an old high school girlfriend, you look back on it with nostalgic glee, but you've both moved on from it. I go there for gigs regularly, but I don't work or hang about the pubs and cafes anymore.

Fast forward nearly 40 years to 2022.  I regularly go to gigs at The Dublin Castle to this day. In recent years, our regular Xmas dose of The Pogues with my friend Paul Evans Pogues tribute band, The Pogue Traders, has been a fixture of Xmas. Lee Thompson of Madness has appeared quite regularly with his other bands, The Ska Orchestra and The Silencerz and a host of other bands from my studios regularly play there, with The Shoals and Dubvocalisa recently performing.

A friend of mine got in touch in September and said that the Dublin Castle needed a band to fill in at short notice as they'd been let down, asking if the False Dots would be interested. As we had a rehearsal booked on that date, it seemed like a good idea, we were all available.  We put a few things out on social media, hoping to see a face or two and expected to play to an almost empty hall. We were pleasantly surprised to find it busy. We've been working on a new set with a view to releasing an album in the Spring, with a small tour. The gig, which we originally just viewed as a 'live rehearsal' gave us a big lift and validated what we are doing. It was great to be back in Camden. Our last Camden gig had been at the sadly closed Purple Turtle back in 2010, supporting punk icon Jock McDonald and the Bollock Brothers

As we had to arrive at 5.30 for a sound check, I got to spend longer in Camden than I had for ages. It got me thinking about how the area has changed.  As we waited, I filmed some clips of the venue. Just looking at the posters on the wall and the jukebox inspired me to write a new song. We'd already decided that we'd put 12 songs on our forthcoming album, all new. I'd been stuck on eleven, running out of inspiration for a 12th song. Performing at the gig, I was inspired to write a song about the Dublin Castle and Camden Town, which I entitled "Dublin's finest castle".  The songs sums up much of what I have to say here. Once I knew what I wanted in the video, I went down and spent a day filming footage of the area and drinking in some of my old haunts, which helped me form my thoughts and complete the song. It was quite strange to see how much even the less well known parts have changed.

It confirmed what I'd felt for a long time. What was starting in 1983 has more or less completed now. There are no old school cafe's with formica tables and builders tea, such as the Delancy Cafe, where I'd have  a cuppa and a bacon sandwich and chat to the local dustmen on their tea break. The Pool tables are gone. There are a few decent music pubs still putting on bands, with the Dublin Castle, Fiddlers Elbow and the Monarch springing to mind, but it is rare to see a bunch of teenagers in a band playing their own numbers. Whereas in the 1970's, as a teenager I'd nip down to Camden and pay to watch a band I'd never seen, on the offchance they may be good, with a buzz being generated by flyers and word of mouth, now it's all done on social media. It was nice that when we played at the Dublin Castle, a few tourists nipped in to watch us and stayed to the end.

As to the Jazz Cafe, they have some great artists, especially from the Reggae scene. This year I've seen a couple of Reggae legends - Eek a mouse and Yellowman.  Before I visit the Jazz Cafe I usually have a beer before at the Spreadeagle, which has my favourite chair of any pub in London, where you can sit and watch the world go by on Parkway.

It's not all gloom and doom though, back in the 70's it seemed as if the Odeon cinema was on it's last legs. It was run down and there were constant rumours that it was going to be redeveloped. Somehow it survived and seems to be going stronger than ever. The regeneration of The Roundhouse has been a joy to behold. I've seen some absolutely amazing gigs there, Smokey Robinson, The Sex Pistols, The Damned, Nile Rodgers are a few that spring to mind as especially good. The space is a wonderful place for live music and they've done a fine job restoring and repurposing a wonderful Victorian space.

The canal and the lock have always had a special fascination for me. I love taking the train from Mill Hill to St Pancras and walking up the canal to Camden. You really see how London has changed. That may well be a London symphony of  it's own. I find I don't recognise much of what has been built by the side of the canal. The canal seems cleaner and the people who live on barges now are not the characters of old.

Camden has always been a great place for people watching. I miss many aspects of the old Camden Town and in many ways, the new Camden Town is spiritual home to a completely different generation. They will be writing their own London Symphonies and telling the stories for years to come. They won't tell tales of working packing books in warehouses and drinking builders tea, but the stories will be there.

My story and my love affair with Camden has not died. Whist the Dublin Castle still puts on bands and serves Guinness, a part of me will always feel very at home in Camden Town. Next door to The Dublin Castle is the Rock and Roll rescue shop, a charity run by Knox, the singer of the Vibrators. I nipped in for a chinwag with Knox on my travels. He sums up the changing face of Camden. The Vibrators at The Roundhouse was the first gig I went to with my mates and without older siblings etc. The band were then an up and coming band, with Knox at the helm and Eddie on an illuminated perspex kit. Now he's the senior statesman of Camdens Rock dignitaries.

I am delighted that The Dublin Castle have asked The False Dots back on the 23rd November. I'm even more delighted that The Shoals are the support, a new band featuring the son of Madness legend Lee Thompson and also legendary ska sax player Spencer Wade (Bad Manners, Madness).

When we recorded the track Dublins finest castle, we wanted the song to capture the feeling of Camden and the Dublin Castle. The musical genius that is Fil Ross, my co-producer did an amazing job (a hint to all aspiring muso's, always have a musical genius in the band). Fil played a banjo solo at the end, to give an  authentic Irish feel. He also replicated my guitar riff from the intro, whistling it on the bridge between the chorus and second verse, as I'd said I wanted the song to sound like you were walking down Parkway to the Dublin Castle whistling the riff. I am really pleased with this video, it really captures the vibe of Camden and the Dublin Castle.

As the chorus of the song says

The Dublin Castle, it just hasn’t changed, nothing else round there is quite the same

Madness to Amy, they’ve all been here, for just a few quid and a pint of beer

The Guinness is good the bands are great getdown early it starts at 8!