The tragedy of the Koko fire in Camden

Last night, I was made aware of a fire at the Koko nightclub in Camden Town. Originally built in the 1930's as the Camden Theatre.


The Camden Theatre in the early 1900's. Once used by the BBC Orchestra, it has more recently been renamed Koko, and was damaged by a fire last night. pic.twitter.com/scFGo6WGbg
— NW London TimeMachine (@time_nw) January 7, 2020 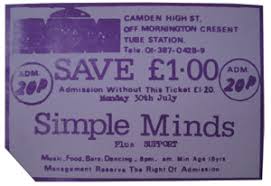 I first fell in love with the venue in the late 1970's, when it was the Music Machine. The venue would give out flyers that would get you in the next week for next to nothing. I went to dozens of gigs, if you didn't like the band, you'd go upstairs to one of the bars and play pool.

I saw some great bands there, but a few stand out. Perhaps the day that I recall most was when The Vibrators played there. Myself and Pete Conway, thinking it would sell out, bunked off school early on the 18th May 1978 and went down to be at the front of the queue. There was no queue and we sat in the Wimpy over the road, drinking tea for hours. Eventually a roadie for the band came in. We got chatting and he got us in for free. The Wimpy felt sorry for us and only charged us for a couple of cups of tea. Like many of the gigs from the period, I remember little of the gig, other than that it was a great night. Bands like The Yatchs, Monochrome Set and The Boys. There is an almost complete list of gigs at the venue here http://www.45worlds.com/live/venue/music-machine/4 - well worth a look.

Perhaps the thing that really made the Vibrators gig special was that the roadie we met was Paul Fox, later to become the guitarist with The Ruts. As a result we got to see many of the Ruts early gigs. Paul was an amazing guitarist and gave the Ruts their distinctive, edgy sound. Whenever I think of the Music Machine, I think of Paul.

For two or three years, I'd go to the MM at least once or twice a month to check out new bands. Once the Roundhouse stopped staging gigs, it was the preferred option, as it was easy to get to.

It then morphed into the Camden Palace. We went down the opening and were horrified. I didn't go back until 1982, when my then Swedish girlfriend insisted. She wanted a boogie, but it wasn't the same for me.

In more recent years, the venue morphed into Koko, which is a great place to see a band. My best  night there was for the Premiere of the Julian Temple film about The Feelgoods. The film was shown and then Wilko Johnson did a set. The highlight was when Alison Moyet joined the band. She was awesome. My wife got me down for a Tony Blackburn soul night which as a bit of a hoot.

The saddest aspect was that the venue was being enlarged and improved. It seems that the steelwork put in may well have saved the building. I hope it reopens soon.