We've just got back from two weeks in Madeira with our friends. We had a week in Funchal and a week in Calheta. It was amazing. If you want a few suggestions, check out my Tripadvisor, I will be adding a few over the weekend.

None of this for a while, back in Mill Hill, back to work tomorrow pic.twitter.com/A9XJCtjq9m 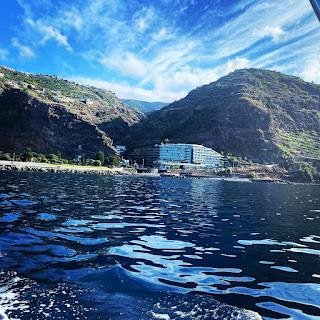 I only do reviews for places I think are worth going back to. I'm not into the dagger in the back reviews. But we arrived back in Mill Hill at ten to twelve. Four hours flight in a facemask, then held up for a while as the Police arrested an elderly man on the plane, telling his disabled wife to stay on the plane. I thought she was going to have a heart attack. I've no idea what he'd done, or why they wouldn't let his wife go with him. It seemed to be a cruel way to treat anyone. As BA unboarded the flight in strict row order, by the time she could get off she was in a complete state. I am sorry to say that to add to the horrible scene, a man started abusing her for holding him up. If by some remote chance, he's reading this, you are a disgrace. A bag of crisps, a biscuit and a small bottle of water for a four hour flight. Normally, I'd have called ahead to the Mill Hill Tandoori, which opens till twelve in normal times, and had a curry waiting. The new normal ruled that out. I had an egg on toast (all that was in the fridge) and a cup of tea.  Welcome back to Great Britain. It felt like I'd arrived in a fascist state that had gone insane. I felt extremely depressed, far more than I've ever  felt before on arrival from a good holiday. I couldn't sleep, I felt sickened by the whole thing.

But I did nod off. I was awoken with a nice cup of tea by my lovely missus. The radio was on. Strangely, Carrie and David Grant on BBC radio London asked what listeners did to stave off depression.

The best thing for mental health is playing a musical instrument. The concentration on playing and beauty of the sound produced transports you from your issues to a better place. I always feel reinvigorated after practice. If I feel down I will play a piece that is uplifting

It got me thinking. The first thing I thought was that I play guitar. I tweeted this, from our studio account, and they immediately read it out. It cheered me up. I thought what are the ten things I'm pleased to get back to Mill Hill for.

Much as I love travel, you cannot get decent tea for love nor money. Only London has water that makes tea taste good.

This is my station. I listen to it on holiday when I can, but we had a busy itinery, but again, it doesn't sound right. Hearing the Grants and then Robert Elms cheered me up no end.

To my delight, in Funchal, there was a guitar in the apartment, so I could practice. But it wasn't my Strat. On holiday it got me thinking I need a songwriting retreat, on my own. I read two books. One by Viv Albertine and one by Patti Smith. It reminded me of being what an artist should be. But one of the first things I do is play my guitar and play it loud.

4. Going for a Darlands walk with the doggies.

The dogs are currently yoguing me, asking for their walkies. When this is done, that will be the next task.

I will be at Brickfields stadium later, to watch some football in the rain. What could be better?

Come on you Bricks! pic.twitter.com/ROXdH2daj3

6. Having a curry at the Mill Hill Tandoori.

After the footie, we will have a curry. This marks the official end of the holiday. I love the Tandoori. For me, it is the restaurant that I feel most at home in.

7. A pint at The Mill Hill Services Club.

I will have a pint of Hophead and hopefully a few friends will be in there.

8. A Sunday roast with a good cut of Beef from Boucherie Gerard.

You can't beat a lazy Sunday Roast. This will be after work. Tomorrow is my first day back at work.

I've not played for three weeks, can't wait to get back to Powerleague this Thursday.

10. The Good Earth on Tuesday.

We will be celebrating my daughters birthday on Tuesday. The Good Earth is an exceptional restaurant. We are lucky that it's walking distance.

When you think about it, life isn't all bad, when you get back.