The Wednesday Poem Special - The final day of Donald Trump

I haven't published a Wednesday poem for a while. On this momentous day for the USA, I thought I'd mark it with a poem. 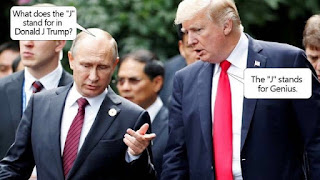 It shouldn't concern me, but I've got to speak,

About the end of the era of Donald the Thick,

It's been quite 'interesting ', I've got to say,

To witness all the fun in the USA

Why don't you move to Russia, do us all a favour?

But what will you say when you meet your maker?

The shame of your reign, you just can't undo

From  travel bans, to covid, from BLM to bust,

"grab them by the pussy" mate, you can't control your lust

I don't want to share my world with you

But your time has run out now, there's nothing you can do

Maybe if there's Aliens they'll do us all a favour?

Take you on a one way trip, to the planets around Vega,

The shame of your reign you just can't undo.

I guess it's hard not to have an opinion about Donald Trump. For me, the defining moment of Trump was when he slagged off members of the armed forces who got taken POW. This from a a draft dodger. My father was a former RAF pilot, shot down on the 38th and final mission of his tour of duty in 1944, taken prisoner in Rumania and held as a POW in a camp in Bucharest.  I can forgive most things, but when a man slags off the bravery of people like my Father who risked their lives to serve in the armed forces, there can be no way back. Whatever you may think of the armed forces, if a member has been captured, by definition, they have put themself at risk for your country.  I will have no truck with someone like Trump who disrespects this.

The bottom line is that Trump is a loser. 400,000 Americans died of Covid on his watch of covid. America's standing in the world has suffured immeasurable damage. I love the USA, my sister is a citizen and it is one of my favourite places. We owe them a debt for their support in two World Wars. They have supplied much of the technological innovation that makes the modern world such a good place to be. They deserve a President who can match the proud history of the country. Trump is not and never has been a man fit to follow the footsteps of Lincoln, Roosevelt, etc.

In 50 years time I am convinced that those of us still around will look back on this as a very strange time.

Email ThisBlogThis!Share to TwitterShare to FacebookShare to Pinterest
Click on Labels for related posts: Donald Trump, The Wednesday Poem