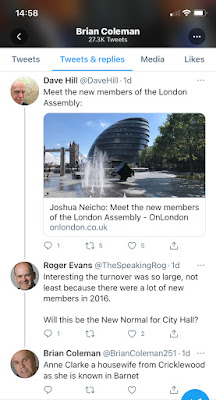 It will come as no surprise to anyone to learn that former senior Barnet Conservative politician Brian Coleman, once convicted for assaulting Cafe Owner Helen Michael on Finchley High Road, is up to his old tricks of misogynistic abuse on Twitter.

Mr Coleman has tweeted today describing the new Labour London Assembly member, Anne Clarke,  as "A housewife from Cricklewood as she is known in Barnet". What might surprise readers of the Barnet Eye is that Mr Coleman was the Conservative Candidates Roberto Weeden-Sanz  guest of honour at the GLA count and by all accounts acted as a mentor and main campaign adviser for him. A little bit of searching on Twitter revealed that this patronising insult was not the first time that Coleman had used this term, regularly launching this insult at Anne Clarke during the campaign.

I find it rather odd that a Conservative should find the idea that the term 'housewife' is an acceptable putdown in this day and age. The sheer snobbery in his tweet where he asks "A Cricklewood housewife or the former President of the Oxford Union" about the choice between Clarke and Weeden-Sanz is there for all to see. Rather interestingly, the People of Barnet and Camden decided that they much preferred Anne Clarke and were clearly not as impressed as Mr Coleman at Mr Weeden-Sanz former acedemic exploits. 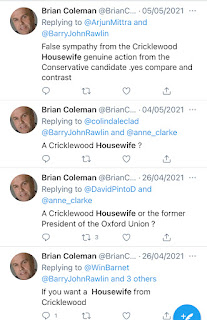 As regular readers will know, I've spent many hours at the Town Hall, observing our local politicians. I have to confess I was surprised when the Tories picked Mr Weeden-Sanz as their GLA candidate. The reason? He'd made absolutely no impression on me at all.
There are several Tory Councillors who I have observed, who have shown that they would make good and engaging candidates. I'd list Laith Jajeh, Alex Prager, Helene Richman and Saira Don are ones that spring to mind as having shown that they have something about them. When I look through the list of Councillors in Barnet, there are always a few that I see and think "Oh, I'd forgotten about him/her" Councillor Weeden-Sanz was pretty near the top of this list. I can only assume that someone with an excellent sense of humour or a malicious grudge against Roberto, thought it would be a wheeze to let Brian Coleman mentor him.
It seems strange that the Councillor Weeden-Sanz turned to a man who'd transformed a 20,000 vote majority in Barnet and Camden in 2008 into a 20,000 loss in 2012 GLA elections, in a year when Boris won a strong triumph in London, to be his mentor. Given the fact that Labour do not have a single MP in Barnet, one can only wonder at how bad the campaign Mr Weeden-Sanz ran could possibly be.
I know Anne Clarke well, although we are members of different parties, I consider her a friend and have a lot of admiration for the work she has done with the Cricklewood Town Team and as a Councillor in Childs Hill ward. I find it insulting and patronising that a former Mayor of Barnet and GLA Assembly member can refer to his successor in such a manner.

One has to ask Roberto Weedon-Sanz whether he thinks his 'mentor' and friend's lack of manners and respect is something he thinks is clever and funny. Just in case you were not aware of what sort of a chap Mr Coleman is, here is a video of his assault on Helen Michael, that resulted in his conviction. This made the ITN News. I wonder if this really is the sort of thing that the Conservative supporting females really want associated with the party. I'd remind Mr Weeden-Sanz that we judge people by the company they keep.