If like me, you are old enough to remember the 'Watergate Scandal' in the USA that brought down President Richard Nixon, you will know that it wasn't the burglary on the Democrat campaign office by some Dodgy Republicans that brought Nixon down, but the cover up that Nixon unwisely authorised.

It seems we might have our very own Watergate scandal, or Teddygate as we shall henceforth know it in this blog!

Let me tell the sorry tale.  Yesterday, our friends at the 'A Better Mill Hill' Twitter feed posted that the much loved Teddy Walk between Lawrence Street and Birkbeck Road, which has been decorated by local children with Teddies and has become a local talking point, was being cleared by workers from Barnet Council. 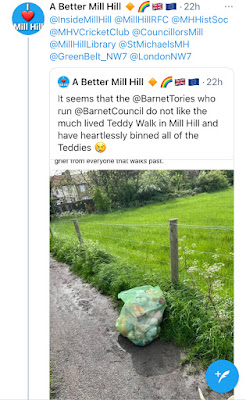 The Barnet Eye knows this walk well. We regularly walk our dogs along the route and it is always a joy to see parents and grandparents with toddlers enjoying 'seeing the teddies'. Sadly we also know that not everyone is a fan. I was recently approached by a local, who describes themselves as 'a bit of a curmudgeon' who told me that they were aware of a small number complaints to Barnet Council about the teddies which were 'an eyesore and a covid risk' which had been ignored and asking me what I could do to get them removed. I replied that I did not have a problem with the Teddies, but if they genuinely felt it was a problem, they should report the problem  on the Barnet Council website and send their local councillors an email. I was informed that this was exactly what they would do.
When I saw the post, I naturally assumed that our friendly local curmudgeon had done just that and the council had taken action. Generally Councillors will get on to the street scene department if residents report issues of fly tipping etc, which aren't being dealt with. In my experience, councillors of all parties are usually quite good at this. As none of our local Conservative Councillors actually live in the ward, it struck me as likely that they were not aware of how popular the walk has become with local families. I wouldn't have been surprised if they had simply acted without fully understanding the background, but I am sure the way our curmudgeon described it would have had teams down in hazard suits.
Later yesterday, the Mill Hill Councillors responded on Twitter and denied all knowledge of the now infamous 'Mill Hill Teddy Massacre'. This was followed by a rather more terse 'we will reply when we have the full facts'. 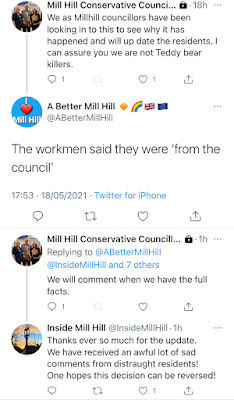 It won't surprise regular readers to know that having supported many Unison initiatives over the years, I have some excellent moles in the Council. Just as the Watergate scandal had a whistleblower called Deep Throat, we have our very own Deep Throat in the Council. It has been suggested to me that whichever one of the Mill Hill Councillors posted the first response had not properly discussed the matter with their colleagues and jumped the gun posting the denial. My contact in street scene told me that Barnet Council do not do major operations such as the Teddy clean up, which may have a negative PR element, without speaking to the local councillors.
Of course, given the nature of this whistleblowing, I cannot really say whether this is correct and whether Barnet Council has a rogue team of Street Scene operatives intent on massacring the local Teddies, but I do know that they seldom spend money on such operations without good reason.
All we are asking for is transparency. We don't want names named, if it was simply over zealous street scene cleaning. We'd just like to see some evidence with names redacted. If however, a councillor did get the Teddies massacred, they should come clean and say so and apolgise to local kids. If they had to go, they should have had a proper send off and a chance to be rehomed. For such a well loved site, the Council should have given some notice and given people the chance to give their feedback.
If you want my view, I think the Teddy walk brought a lot of joy to a lot of people. I think that what we should do is have an annual 'teddy walk weekend', where the route can be adorned with Teddies and at the end of the weekend, the teddies can be rehomed with children who might appreciate them.  Maybe we could have a few set in a case permanently. There will come a point where they will start looking worse for wear, so an annual Teddy walk would seem to me a great way to keep the children happy and do some good. What do you think?