This is a project that I've been planning for a very long time. London is my city. I've never felt English or British, but I've always felt London. My Dad was an Australian, born in the outback in a town called Blackall, in Queensland. My mum came from rather mixed heritage.

My mum's Dad ended up in Kentish Town in the 1930's. An Irish immigrant looking for work. The family followed him down. My Dad arrived in 1942 to fly bombers for the RAF with 40 squadron.

When my mum got to 60, she got a free bus pass. Every Thursday, she'd jump on the 113 and tour London. During the war, she'd been a telephonist at Barclays Bank offices on Lombard Street. She told stories of blown up buses and air raids, she visited all of the sites. She told how her Brother came home from the D-Day invasion on leave and was woken up by an air raid. He said it was noisier than at the front. Mum loved London. She felt that it gave everyone a chance. She loved the department stores, the theatres,  the buildings, the parks.

On Monday, I got my over 60's Oyster card. I've been planning this for a very long time and now the journey begins. London Symphonies is a project I've been planning to catalog my London. This will be done in stories, pictures, journeys, music and videos (more of that later). My plan is to follow my mum's example and use my pass to visit places new and old to me and to document them, transforming some into songs and videos. I hope that you enjoy this symphony! 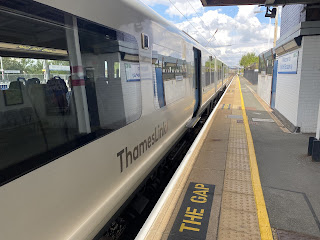 Every Journey starts somewhere. Mine starts in Mill Hill Broadway on the Thameslink station. For 35 years I did this journey just about every day. When I started, it was clapped out British Rail smelly diesel trains. These morphed into electric trains. I recall learning of Thameslink and a thrill of excitement that you'd be able to get a train from Mill Hill to the seaside at Brighton. In the early days there was even a tea trolley.  Although the constant disruption, with excuses from the sublime (goats on the line) to the ridiculous (wrong type of snow), was wearing, I've always had a soft spot for a train service that has taken me into the heart of city. 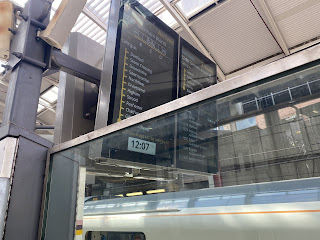 For our journey, we have to change at Farringdon. Farringdon is an interesting station, that has had two big facelifts over the last few years. The first as part of the Thameslink program. Prior to Thameslink, Farringdon Station was run down and unattractive. It was grimy and hadn't been cleaned since steam trains ran. More recently, the Elizabeth Line has opened, but we'll explore that another time. Farringdon went from a being a rather dour, depressing tube station, with an intermittent commuter rail service to being a key London hub. 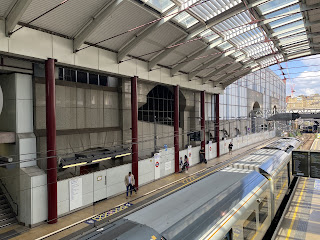 The station roof, which is an pretty amazing piece of engineering.  It's been repaied. repainted, rebuilt. In this picture you can see the new section, installed for the lengthened Thameslink platforms. In the old days, if you were on this bit of the platform you got wet.
My recollections of Farringdon never, ever had the sun shining through the roof, illuminating the fresh paintwork.
Times change and London changes. 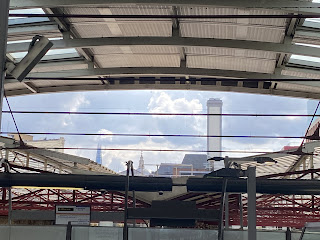 New Walkways have been installed between the platforms. If you take your time, you can see landmarks such as St Pauls from these. You also get a nice view of the ironmongery of the old station roof, which has been repainted.
I've rarely lingered in Farringdon, there are some interesting sights to see locally, but again that is for another day. This symphony is not in Farringdon, it's to the East. Consider this as part of a bigger story, a jigsaw, one that will not be completed but as you go a picture emerges. Not necessarily the one you expected. 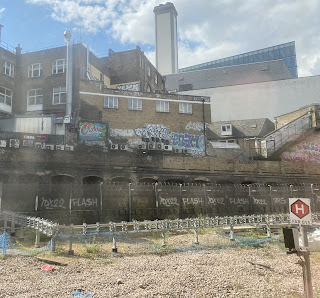 We depart Farringdon on the tube. London's railways and the surrounds are canvasses for the taggers and graffiti artists of London. Next to railways, there always seems to be lots of old, abandonded space in London. These netherlands fascinate me. This particular one is visible as you depart Farringdon on the Eastbound tube.
London is a mish mash of different archetectural styles, here you see Victorian building along side 1970's blocks and in the distance things seemingly built last week.
This is one aspect of London that fascinates me. For many this is a dull view, uworthy of comment or even a second glance. To me it is a rich tapestry. There are a lot of stories in this picture. 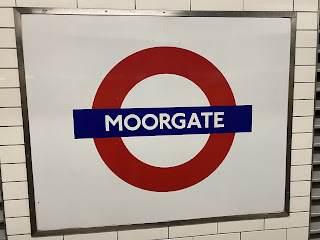 And we reach our destination station, but not the end of our journey. Moorgate Station. For a number of years, I'd use this as the start of my journey back to Mill Hill. Thameslink trains would terminate here. When I first visited the station you could see daylight and diesel trains belched fumes. These days the Thameslink tracks are a ghost line. The Thameslink project severed the connection, so you get the tube from Farringdon to Moorgate. There is some talk that they will reopen as sidings for Metropolitan line trains, I find ghost stations rather spooky. I'd like to see an art installation. 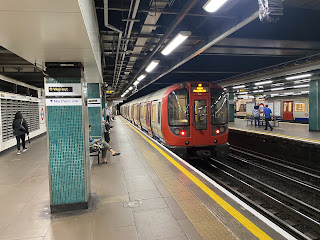 Moorgate is one of the less lovely tube stations. Whereas Farringdon is rather magnificent. Moorgate has a sort of 'afterthought' feel to it. Where there was daylight in the 1970's, there is now a building on top of the line.
You can get an Elizabeth line train here, although the map shows the station as Liverpool St. A ghost station, that sort of half exists.
In the early 1970's there was a terrible tube disaster on the Northern line platforms (not here, this is the Met line), I've always felt a dark gloom enveloped the station since. 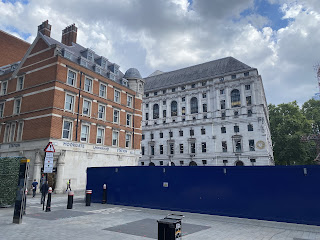 When you emerge from the station, you find a building site currently. There is a curious non frontage on the Tube station. The Natwest Bank building beyond is interesting, worth a closer look.  This picture, although on first site not particularly fascinating, is one that sort of sums London up. Constant building, lovely buildings left to their own devices, bollards and traffic schemes.
In five years time, this scene will be completely different, a different story. The London book is constantly rewritten. 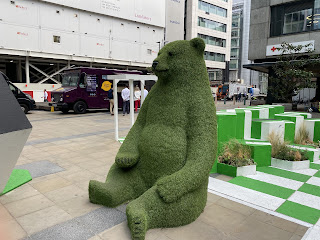 As we head towards Chiswell St, via Ropemaker street, a road I know well, as I worked in an office there, I see something new and different. A large bear carved from a hedge. He looks rather smart,but no one is batting an eyelid. This is a new edition since I was last here, pre covid.
London has seen a whole raft of such things appear, as we try and tempt people back after the pandemic. I'm not sure how many people will be visiting Moorgate to see the 'Hedge Bear', although I rather like him.  By the Hedge bear, we have a new 'food market', currently made up of three vans. 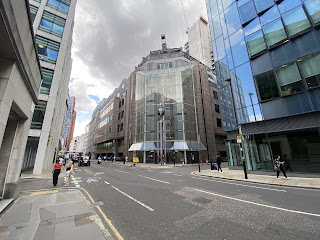 On Chiswell St, I paid homage to my old office.
It's quite an attractive building with a clock to the front of it. I worked here for a couple of years and never noticed the clock. When you work somewhere, you are generally keen to get in and out as quickly as possible. The building was far more attractive than I recall, although the area I sat in was not exactly exciting or welcoming. I guess that when you work in a building, you generally are not too bothered about what the external look is. 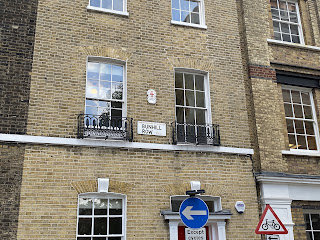 I make my way up Bunhill Row, excitedely looking forward to imminently arriving at  my destination for a fine pint and a decent lunch with a good friend, I take time to inspect the buildings. The fine bricjwork, the wrought iron railings and the City of London signs. Things I'd never have noticed when I worked there.
I'd always have been in a rush to get there, have a beer and get back for the afternoon shift (such culture has all but disappeared). 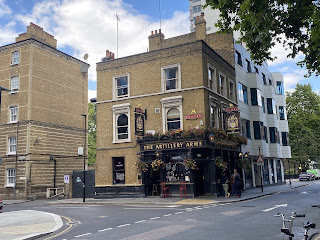 And here we are, at our destination. The Artillery Arms. Infamous in the 1960's as a site where the Kray Brother would transact all manner of dodgy deals and worse!
These days a well turned it and appealing pub. My friend Frank, a Liverpudlian and I, spent many a pleasant lunchtime here. The pub had a decent and well priced menu and a good selection of Fullers beers. Frank lives in Reading. We've not seen each other since before the lockdown, so it was a logical choice for two OAP's to meet up! Sadly, we found we'd been Boris'd. 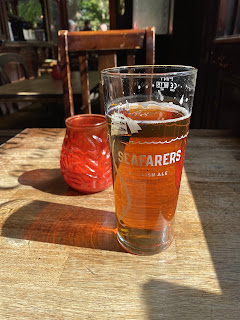 The lunch we planned was scuppered. The pub can't get kitchen staff. We had to nip around the corner to Whitecross St market and get a pie and mash, which we brought back and ate in the pub. Whilst it was tasty and good value, we had a pang of disappointment that the pub couldn't recreate those amazing lunches for us. That is London, you don't always get the end to the symphony that you expected.
Fortunately they still sell a fine pint of Seafarers Ale. A nice session ale. Pubs like the Artillery Arms need your support, so please nip in if you are passing.
We had a pleasant chat and a thoroughly enjoyable lunch. The last time I had lunch with Frank was in November 2019. Much water has passed under the bridge.  At the weekend, I was explaining my project to a cynical mate. He said "Who would be interested in your ramblings about going for a pub lunch?"
My reply? "Who know?", but I guess if you stuck with me, you may be. I hope that the first piece of the jigsaw was worth the effort. 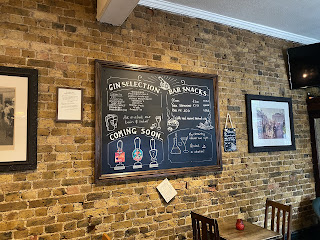 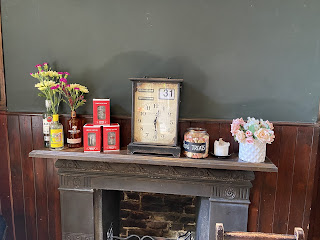 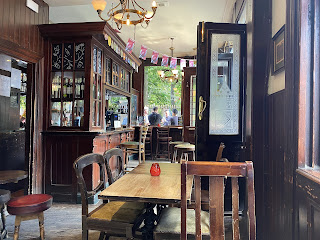 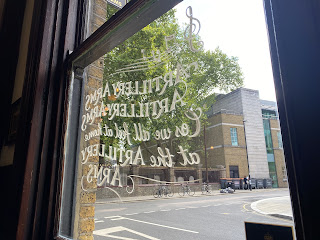 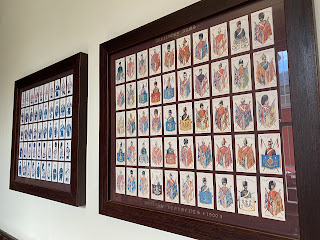 And the backing track for all of this is a celebration of British Rail and the service from Mill Hill.