Mill Hill School and the hypocrisy of the press

Imagine my surprise to get a message from a mate in Australia telling me that Mill Hill is the number one news story in Adelaide! It seems the Aussies are rather tickled by the huge "scandal" that has blown up after a rapper hired Mill Hill School to make a pop video.  It seems that the Head of the school has resigned following the backlash following the release of the video.

What is all the fuss about? Well here is the video.


I rather enjoyed it. I always enjoy videos shot around Mill Hill, I've made a few myself. As you may have expected, the faux outrage was lead by the Daily Mail. There headline announced
"Top private school is forced to apologise after allowing rapper Stefflon Don to film sexual and drug-filled music video in its grounds" The article continues "The video storyline is about a new girl arriving in school. Stefflon Don’s character wins over classmates after playing in a football match where she swears at an opponent she suspects of diving."

It also quoted Chris McGovern, chairman of the Campaign for Real Education, said: ‘The message being sent by this video popularises everything which good schools should be against – drug-taking, swearing, and overt sexuality. These are all things which schools should be trying to guide pupils away from, not promoting them. Parents who are paying the fees for their children to go there will be appalled'. I was intrigued who this guardian of educational standards was. What is the Campaign for Real Education? I had a look at their website. I was amused to see that on the front page there was a basic typo. I do think that such organisations that lecture others, should at least do a bit of checking of their own websites. The link to their summer 2018 newsletter says Summer 2019! 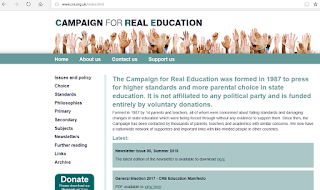 I clicked through and I was saddened to see the sort of lazy rehashing of half truths and opinions presented as facts.  There is a long article about Drill music. Here is just a snatch of their rather intellectually lazy rant


In the form of ‘drill’ the purpose of the music is gang-related. Often it is generated by a desire to challenge or threaten rival groups. It has its roots in the gangland and murder culture of Chicago but, as UK drill, is now firmly rooted in our cities, especially London.
Highly discordant and alarming the sound of ‘drill’ is the sound of innercity boys and it is getting ever louder!  This is payback time for alienated and the marginalised young males, for the under-educated and the politically-uncorrected outlaws of our society. Drill has become their theme music.
Putting into action boasts of violence expressed in drill has become expected behaviour for its adherents. The father of one ‘drill’ musician’s murder victim described the music as having ‘a demonic mindset’.

It is almost impossible knowing where to start, but lets have a go. Firstly, as to Drill music getting even louder, the height of earbusting decibels is nothing to do with Drill. It would be heavy rock and metal bands with Manowar holding the record with 139 decibels. The Rock genre was also often accused of having Satanic or demonic overtones. There are many Satanic top tens for artists and bands and Drill music does not feature in any.  The article talks of Drill being the payback time for alienated and marginalised young males. To me it is rather imbecilic to see Drill as anything other than a symptom of the dysfunctional nature of our society. It is of course awful that some Drill artists are using their music to incite people into violence. I believe that in such cases, we have laws that already cover this. If you signpost someone for violence, the you really should get a visit from the law.

Oddly the article also objects to the fact that Rapper Dizzee Rascal's lyrics have been used in the A Level syllabus. As Rascal is not a Drill artist, I found this comment slightly strange.

‘Drill’ is an adaptation of so-called ‘rap music’ that already has a place in the music teaching of many schools. Indeed, the lyrics of one notable rapartist, Dizzee Rascal, now appear on the A-Level English syllabus.

For the record, RAP stands for Rhythm and Poetry. I would have thought that any legitimate campaign for real education would be delighted that disaffected young men were getting into writing poetry. So can Rascal write decent poetry. Here is an extract from Space


Babylon's calling me, nobody's fooling me
I do not roll with the masses, but big up the Junglist massive
I am not timid and I am not passive, messing with me? You must be on some acid
Done with the racket, I will get erratic, all of my problems disappear like it's magic
It'll be tragic

It's not my style but it is pretty good. It is hard to read it without rapping as it's got an amazing natural rhythm. If you are going to criticise an artist or poet, at least do your homework.

Having trawled the CRE's website I'm not surprised that they are the first stop for the Daily Mail when trying to whip up some hysteria. They object to the promotion of drug taking, swearing and overt sexuality. I must admit that having seen their comments before I watched the video I was a bit disappointed. As the Mail noted, the key incident in the video is a ladies football match with some excellent ball skills on display. Oddly the CRE do not mention that the video is promoting sport and healthy lifestyles. The swearing is in the context of one of the players cheating. As someone who has played football all my life, it may not surprise you to know I've heard the odd swear word uttered when a player has been suspected of cheating. The storyboard is that a new girl arrives at the school and is being bullied. She is a strong character and fights back, stands up for herself and wins over new friends. I don't think that is a bad message to send. The drug use, sexually provocative posing and swearing is all rather comic.

I don't know if it is because I've got daughters around the same age, but the sexual content is not what I'd consider to be particularly exciting, it was more like teenage girls showing off with each other. The video ends with a scene in a bedroom of a few teenage girls passing around what is presumably meant to be a spliff. On my regular walks around Mill Hill and its parks and green spaces, I have regularly seen small groups of Mill Hill School pupils drinking, smoking and even having crafty spliffs. Whilst some work themselves into a froth over such videos, I simply see it as a reflection of our society. Should schools rent themselves out to feature in videos etc? I don't see why not. If it generates a few quid, then what is the harm. It is absolutely clear that the school should not want to associate its brand with drug taking etc, but they should simply say "We rented the site and were not properly informed of the content. We do not condone drug use and we will be tightening up the criteria for hiring the school in future". In a sane world that should be the end of the matter.

If the Campaign for Real Education have nothing better to do than act as some sort of cultural police, deciding what Genre of music is ok for the nation and what should appear in videos, then I doubt that there is much need for a campaign for real education. I don't actually know what a real education is. Did I get one? I've no idea. I can read, write and add up numbers. My kids can also do that, probably a lot better than I can. Did they get a real education? My youngest son just got his A Level grades. He did his GCSE's at Finchley Catholic High School and his A levels at Woodhouse College. As far as I can see he had an excellent education. I personally would actively encourage young people to write music, to RAP, to play instruments and to make videos. Should swearing and taking drugs be a part of this. I think that swearing is OK in context. I have records by artists as diverse as The Sex Pistols and The Steve Miller band that have swearing on them. As for drug taking, in the context of RAP and Drill videos, I think it is just a fact of life that this will be portrayed. If you want to see s film with some fairly hardcore sexual activity and drug taking, watch Cocksucker Blues, a documentary about the Rolling Stones.  Maybe I'm just too old and world weary, but I cannot get worked up over a video that is really just a bunch of kids trying to look a bit naughty.

In fact the only thing which really annoys me is the hypocrisy of the Daily Mail, who rail against such videos, whilst staunchly defending a government that has chopped Police budgets, abolished youth programs and lost control of a generation of young people from deprived backgrounds. Artists mirror society. I doubt too many people will remember this video by Stefflon Don in a decades time, apart from a few kids at Mill Hill School who will probably be successful merchant bankers then and will snigger over it as they tell there friends about their experiences at a boarding school.