Barnet Council and Capita - The Marriage made in Hell

This morning, Barnet Council has once more been in the National Press. It wasn't meant to be like this. Back in May 2006, the Tories were lead to a massive victory in Barnet Council by Brian Salinger. His manifesto promised competent local government, low council taxes and good services. Salinger was a competent administrator and a sensible council leader. What he wasn't was a good politician. Immediately after the elections, the then Councillor Brian Coleman lead a palace coup and the Tories replaced Salinger with hard right Thatcherite Mike Freer. As a Thatcherite, Freer believed that there is no such thing as society and that public services should be provided by private contractors. The first I heard of this was in 2008. looking back on my blog archive, there are a whole raft of blogs on the subject (when it was called 'Future Shape").

Back then, this was the only blog in Barnet. There was all manner of sniping and ludicrous comments from people associated with Freer. They dismissed this blog and my opinions as the rantings of an idiot. It hadn't occurred to Freer or his cronies that I had  a skill that I sometimes wondered at the time was unique in Barnet politics. I was reading the documents. It is all very well calling people names, however I was simply providing detailed analysis of their own documents. It took a few years, but eventually the penny dropped. These days the Barnet Tories never comment on my blog and privately most admit to me that I was right all along about Capita. One blog from this period that stands out is the one from Wednesday 18th December 2008. I wrote the following

"I looked up the word zombie on the cambridge on-line dictionary.
zombie Show phoneticsnoun [C]1 INFORMAL DISAPPROVING a person who lacks energy, seems to act without thinking and is not aware of what is happening around them:He just sat in front of the TV all day like a zombie.
2 a dead person who is believed, in some Caribbean religions, to have been brought back to life by magic
Both definitions brought to mind the "Future Shape" scheme. Remove all personal resoponsibility from staff, employ the lowest common denominator. If Zombies 'R' US tendered for the contract ("They're dead, they don't want to be paid") they'd win hands down. They may do a rubbish job, but hey they're cheap.
Barnet has experience of Outsourced contracts. Fremantle, Sodexho (meals on wheels). Does it bode well? Now I'm all for a bit of efficiency and lower tax bills (who isn't).   It's just that Barnet has a history of not implementing schemes very well."

So nearly ten years later and five years into what Future Shape morphed into, was this a fair description? I said then "It's just that Barnet has a history of not implementing schemes very well. " My worry in 2008 was that with Barnets track record of managing external suppliers, they simply didn't have the skill set to make this work.

Over the years since then, the Barnet bloggers have built up their strength. In 2009, John Dix AKA Mr Reasonable joined the scene. John has a very different style of blogging to me. John is very much a facts and figures man. Someone once commented to me, in a rather sneering fashion that 'The Barnet Eye is The Sun of Barnet blogs and Mr Reasonable is the Financial Times". Although I loathe and detest The Sun, in many ways it is a fair comparison. Like the Sun, I cover a whole range of subjects, football, music, news and just about anything else that tickles my fancy. I try and write in a way that is engaging. John concentrates on detail and making sure that facts and figures are central. John rarely blogs off topic. I blog because I enjoy it, I suspect John does it out of civil duty.  What the comment perhaps missed is that we are both 100% serious about the subject. I put a huge amount of work into researching the blogs on the subject. Unlike our councillors, I read the papers that the council publishes. I am sometimes shocked that the questions asked by myself and other bloggers result in quite astonished looks on the faces of councillors on the committees. They are supposed to read the papers, so they should know what is being questioned, but time and again they don't. The questions are published before the meeting, and they don't even seem to read them in advance. They certainly don't read the officers responses, as often they are truly appalling and I can't believe anyone who read them would.

Last month John published a whole series of blogs on the subject of why the Capita Contract isn't working and why we are being ripped off.

Whilst there are many things I anticipated about Mike Freer's grand scheme that I thought would be a disaster, some things I completely failed to see on the horizon. Perhaps the biggest one would be that Capita itself was a sham and that it would expose Barnet taxpayers to huge risk. It should have been clear to all. In 2013, the Barnet Eye held "Capita Week", This was a whole week of blogs dedicated to the failures of Capita.

Here are the stories

The Friday Joke - 21/12/2012 (link to Richard Cornelius taking about One Barnet on the Sunday Politics show).

It is worth watching the Sunday Politics show again that is included in the clip.


Richard Cornelius states that they were "only outsourcing things that were easy like back office services" in the clip. Having recently attended council meetings where we've heard that Council audits have missed statutory deadlines, unpopular local development applications have been passed by default as the Capita run planning department have not processed the paperwork and as John Dix has demonstrated, the schemes have not saved money.

One of the points we made to Capita at the time was that they would be under constant scrutinty from bloggers and that everything would be exposed. We warned Capita that this would be very bad for their share price. They didn't listen. I have no doubt that their shareholders are ruing the day they set up shop in Barnet. 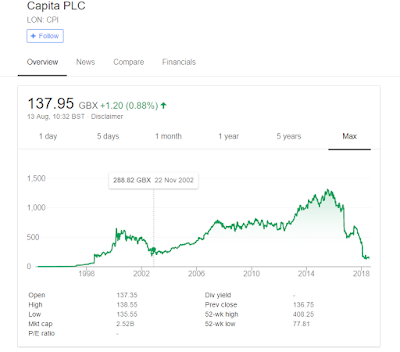 As you can see, Capita's shareprice has tumbled. In short the One Barnet contracts are a marriage made in Hell. Every cock up that Capita makes is exposed. Journalists such as Aditya Chakrobortty at the Guardian watch the Barnet blogs like hawks, as they know we have broken numerous stories on the failings of Capita in Barnet.

This is why we are running the #KickOutCapita campaign. When you are in a marriage from hell, the best way forward is an amicable divorce. The sooner the better. Here is a video we made to support this campaign.


There is no earthly reason for either side to continue the charade, so lets end it ASAP.