London’s Industrial Past by Mark Amies - A review 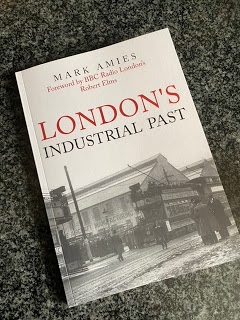 Over the last 12 years of the Barnet Eye Blog, I've got to know some rather remarkable people. Often they have seen a blog or a tweet and got in touch with a snippet of relevant information and things have developed from there. The vast majority I never actually get to meet, but some have become friends. One such person is Mark Amies, who has just written "London's Industrial Past", a book chronicling the history of London's factories. I got to know Mark through his campaigning to save the pubs of North West London from the clutches of bad owners and greedy developers. We have made several videos together, detailing the campaign to save The Railway Hotel in Edgware and more recently a historical piece on the history of Airco in Colindale, which was the largest aircraft factory in the world in 1918 (Airco and London's aircraft industry is one of the topics covered in the book).

Since I first got to know Mark, he has taken on the role of industrial historian for the Robert Elms show on BBC Radio London. Last year when we were filming a piece on The Railway Hotel, he informed me that he was working on a book concerning London's Industrial Past. I was pleased to learn he had found a publisher and that Robert Elms had agreed to write a forward. I told Mark that when it was finished and ready for publication, I would write a review. Last week Mark dropped me off a signed copy and I spent the weekend reading, and thoroughly enjoying it.

To  be honest I wasn't really sure what to expect before it arrived. I've heard Marks slots on the Robert Elms show and I knew that the book would be full of interesting photographs and snippets about the various subjects. What I didn't know was whether a book about a relatively 'dry' subject could be interesting enough to a reader with a casual interest in the subject. I was worried that it would be long lists of widget production in Mile End and discussions regarding the relative merits of square or triangular workshop space with regards to production efficiency. Not being a scholarly type, I would have found such a tome hard to get my head around.

I was pleasantly surprised to find that the book was both accessible and interesting. I guess that like many people, I found the pictures and places that I was familiar with to be the most interesting subjects. The section on the former Whitbread Brewery on Chiswell Street was a good example. I worked on Chiswell Street for a couple of years and had walked past the site every day. To learn some of the back story and see some of the old pictures was for me fascinating, as were the sections on Airco in Colindale and Bentleys, Staples and Handley Page in Cricklewood. The book is a perfect companion to Marks slots on the Robert Elms show, if you have enjoyed these, I am sure you'll enjoy the book. Over the course of my lifetime, many of the factory sites have disappeared, some controversially, most notably the Firestone building. It is good to see that Mark has compiled this book, so that we at least have some reference to what we still have and what we've lost. Without such books and authors prepared to prepare such labours of love, this would all disappear and future generations would never really know about the heritage of their neighbourhoods.

I learned all manner of fascinating snippets of information. For instance I didn't know that Lesney took its name from the amalgamation of the names of the owners Leslie and Rodney Smith (no relation). The book does not go into great detail as it covers such a wide range of industries and factories. Many of the factories would warrant a book of their own, so I think Mark did a decent job of keeping consistency and focus. I think the book would make a very decent birthday or Christmas present for anyone with a passing interest in the history of our city. As Mark comments, he primarily hopes to spark people to find out more. I rather hope that the book does well enough to justify a second volume.

I believe the book is being published on the 14th July by Amberley. It will be available from all good book shops

Here is the short film we made about Airco in Colindale at the end of last year.