The Saturday list #310 - Ten things that should be brought back

Every Saturday morning on BBC Radio London, David and Carrie grant have a 'throw out' where they ask listeners a couple of questions. Today one of of the questions was "who or what needs to be brought back"?

This week on @BBCRadioLondon Saturday Breakfast show @DavidGrantSays and I asking: 1. Who or what needs to make a comeback? 2. What's the song you and your family know all the words to and sing along to? pic.twitter.com/0dRnKwTXsY

This got me thinking. My initial answer was Northern Soul. As it's Saturday and we all love a boogie on a Saturday, here is why - we do need more music like this to be made!

But as I walked the dogs over Mill Hill Park, I started to think of other things that we need to bring back. Here is my list.

1. Strawberry cream tea at The Old Forge. The Old forge at the bottom of Highwood Hill used to be a cafe. In the summer, they would have a Strawberry Fayre on the little green in front of it. It was glorious. That has to be brought back.

2. St Josephs College Garden Fete. My brother Laurie spent eight years studying to become a Priest with the Mill Hill Missionary Society, before he discovered girls and decided that being a welder would be more fun. The society was based at St Josephs college. Every year the society would have an open day and garden fete to raise funds to maintain the building and grounds. There was a working farm on the site, run by Brother Herman, a large Dutchman. The chance to see the pigs and cows was a rare treat and the fete in the beautiful grounds was amazing. My parents were on the committee. Depsite the fact that College was a Roman Catholic institute, the whole community supported it. The Lady who counted the takings was a Methodist, my mums main helper was a good friend who Jewish lady. I was chatting to her one day and she said "I love to see the statue on the College from my window, it's important to keep such amazing landmarks" (she lived in The Reddings). She also told me that St Joseph was the only Catholic saint who wasn't a Christian, he was a devout Jew and a very decent man, who brought up a child that wasn't his own. The fete was always great fun. The college is now residential accomodation and the farm is long gone. It would be nice if the residents held a fete occasionally though, so that all Mill Hill could appreciate the grounds. I am sure there are many great charities that they could support.

3. The Model Shop.  H.A. Blunt and Sons on Mill Hill Broadway by Mill Hill Circus Roundabout was an amazing shop. As a kid I bought Airfix models, train sets, Balsa wood gliders, Matchbox cars etc there. It was a wonderful place. In the 60's, you could put a penny in a machine and a train would do a couple of circuits of the track in the window. As a small boy, this was a rare treat. My mother, being a tight wad would meticulously avoid passing the shop, as she resented paying out to watch a train go round. But my brothers would take me. When the Blunt brothers got too old to run the shop, it sadly closed, despite being profitable. If I won the lottery, I'd deffo bring it back. I'm sure there is a market for a high end toy shop of that ilk. 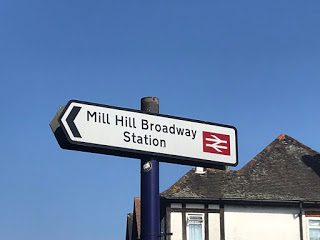 4. Comfy seats on Thameslink. I've been travelling on trains from Mill Hill Broadway since the 1960's. The first train I remember getting from St Pancras to Mill Hill was what I'd call a proper train, with compartments in teh carriages and was pulled by a proper locomotive. It was first stop Mill Hill, which I thought signified the importance of Mill Hill. I imagined it went to Manchester, but probably only went to Luton or Bedford. There was a picture of a stag on the glen in Scotland on the wall of the wooden partition.. It seemed to be the proper way to travel. Being a small child, I don't know if it was a special service or that was a regular event back then. It made a huge impression. After that, the journeys were on rattly old diesel multiple units. They were not quite as comfy as the 'proper train' but you could sit at the front and watch as the train went through the Belsize tunnel. It was always exciting seeing the light appear. When electric trains were brought in, during the early eighties, this joy disappeared (although I'd outgrown the excitement). By the late 1980's Thameslink had opened and new electric trains were brought in. There were replaced a few years ago by the new '700' stock. These are famous for their notoriously uncomfy seats. It occurred to me that every generation of train had become less glamourous and less comfy. The plus size is the service is more frequent and the trains have working toilets, but I do wish they'd give passenger comfort a thought and bring back comfy seats.

5. Decent tea in  cafe's. You cannot get a proper cup of tea in a cafe anymore. You get all manner of poncy muck, often with lukewarm water. I want my tea to taste of tea and be dark brown. I want it served in a mug, preferably chipped and I don't want a mint with it. Last week I had to go to UCH for an MRI, between St Pancras and the hospital, there was not a single proper, traditional greasy spoon cafe.  I miss them.

6.  Proper pancake rolls in Chinese restaurants. My favourite treat in a chinese takeaway was a pankake roll. In Mill Hill we had a succession of Chinese takeaways on Station Road, the first was the New China Garden. This was replaced by The Moon House, then Hee's. They did proper pancake rolls. These are big, they have beansprouts, bits of meat and prawns and are heated to ten million degrees, so you always burn your tongue on them. The art of making such things seems to have disappeared. They are small, they have stuff like carrots in them and taste of nothing. I say 'bring back the proper pancake roll'.

7. Sexy looking cars. My Dad ran a crash repair business. I was raised around motors. I loved the classic designed 1960's look of cars such as the E Type Jag, The Aston Martin DB6, the Mini, the Morris Minor, the VW Beetle, The Mk1 Ford Capri and the Humber Hawk. Now all of the cars are 'ergonomically designed in a wind tunnell' and all look more or less the same. They don't have sexy curves. They are bigger and as ugly as sin. Bring back sexy looking cars!

8. Proper Film Stars.  It seems to me that all the glamour has gone from Hollywood. I was trying to think of my absolute icon from film. To me it is Marylin Monroe and Steve McQueen. When they were on screen, you simply couldn't take your eyes off them. A poster of them would grace any bedroom wall. We just don't have anyone with that impossible glamour these days. Bring it back!

9. The Latin Mass. I'm a Roman Catholic. When I was a kid, Sunday mass was said in Latin. I didn't understand a word. The creed and the Our Father were sung. There were candles and incense. It felt other worldly and holy. At some point, it was decided that we should have mass in English. It has never been the same. It doesn't elevate me to the place that the Latin version did. Is it better that people know what the bloke on the alter is saying? I am really not sure at all. Bring back the latin mass.

10. Proper baked beans. A couple of years ago, we went to Australia and stayed in an Air BNB for  a few days. I bought some of the supermarket own brand beans for a fry up. When I tasted them, I was shocked. They tasted like beans used to taste. I realised that they've changed the recipe in the UK. They now taste like muck. Bring back proper baked beans.