Ripped off and left in the lurch by the RAC

I have been a member of the RAC for twenty five years. My father was a member for 40 years, before he passed away in 1987.  He always said that he trusted the RAC as they had a Royal Warrant and that if you had a car, you wanted a company that would make sure you were looked after. Over the years, I've rarely used the RAC. In fact, I think that in return for thousands of pounds of membership fees, I've probably called them out around half a dozen times, each time usually for a flat battery. Usually this has taken five minutes to resolve. In May, my Vauxhall Corsa had a flat battery. An RAC patrol came out and informed me that the battery was dead. He said that he could supply a premium battery for £109. As my brother is in the motor trade, I can usually get them for £40-50, but I wanted to get the issue resolved, so I went with the expensive option with a proper guarantee. I knew if ever I had a problem, the Trusty old RAC would be at my side. Yesterday, I found that my shiny new battery had failed. This was annoying, but such things happen. I called the RAC and a patrol was duly despatched. By coincidence, it was the same patrol driver. He did various checks. As a result of what happened next, today I've made an official complaint to the RAC and asked for my money back for the battery as well as a pro rata refund on my membership. This is the text of my complaint

I wish to cancel my membership immediately. Yesterday I requested help with my Vauxhall Corsa that had a flat battery, supplied for a cost of £109 earlier in May this year by the RAC. I was informed that this was a premium product at the time, as opposed to the regular cost batteries at £40-50 from Halfords. I was also informed it was under warranty. Due to the pandemic, I have done minimal miles in the car since May. I was informed by your operative that as we had not done sufficient milage, the battery would not be replaced under warranty. I have been a member of the RAC for over 25 years, paying thousands in membership fees, which clearly was of no imprtance to the RAC. As I informed your operative, I had assumed that the RAC was an honest and reliable company that would not sell me dodgy products or leave me in the lurch. I was clearly wrong. Under the sale of goods act, I do not believe that it is reasonable for a premium battery to last six months before completely failing, regardless of warranty terms, and I would expect the RAC to appreciate that our driving patterns are different in a global pandemic . I am entitled to a refund on this dodgy battery and I have no wish to have any further dealings with the RAC. I have made minimal callouts over the years and feel that my loyalty is not valued by your organisation. Your operative informed me that it was my fault for not driving the car enough. Much as I would love to have work, as a professional musician, I do not believe it is reasonable for your company to expect me to drive thousands of miles during a pandemic, merely to keep a sub standard product, which cost twice the going rate, in order.

The RAC patrol informed me that he'd informed me at the time of sale that I had to do a certain mileage for the warranty to be valid. I have no recollection of this, although I doubt he's lying.  I do not however believe that, under the sale of goods act, his argument could be sustained. I would have assumed that the RAC would see how much I've payed over the years and have enough common sense to consider the lost goodwill. I informed the operative that if he did not supply a new battery, I would be ending my RAC membership immediately. He informed me that if I did that was up to me and none of his business.
The reason I needed the car was because I was actually bringing a sound system for the Mill Hill Synagogue's community event in the Mill Hill Town Square. I was left completely in the lurch. Fortunately a friend was able to assist and I managed to just about get set up on time.
There are several questions to consider.
1. Why would anyone subscribe to a vehicle recovery service that sells dodgy products, uses iffy get outs to avoid helping customers and places no value on loyalty of customers?
2. Just suppose I'd been in the middle of nowhere rather than at home. I'd have had no choice but to spend another £109 on a battery to get home. Why would any sane person run that risk, especially when the RAC membership is quite expensive?
3. My parting words to the RAC patrol man were "You and your organisation have failed me. I will asking for a full refund on my membership as I no longer wish to have any dealings with your organisation". I have to assume that his system meant this was fed back. This morning, I received a questionairre from the RAC asking my opinion of the service I received. I told them. You may wonder whether they got in touch. They did. They sent me this email after I filled in the survey. You really couldn't make it up. It was almost as if they were deliberately taunting me (although I know enough about large companies to think it is more likely that they are simply useless). 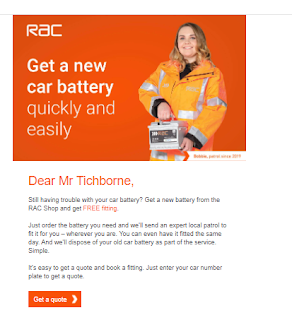 I retained membership of the RAC as I had believed that they were a premium service, with a Royal Charter, who wouldn't let you down. I would have assumed that, as a responsible organisation, they would not use a very weak get out, in a situation clearly caused by a global pandemic. Interestingly, they claim in their email reply to my complaint, that the pandemic has meant they can't respond as quickly, but not that it may also affect my use of my car or the effect on the battery they supplied. They said " Changing driving patterns and staffing challenges faced by all breakdown organisations are disrupting our service and it may take a little longer to investigate your concerns." In a normal year, when I am doing normal milelage, the situation would simply not happen. My family have been in the motor trade since the 1940's. I know about cars. I know batteries need a decent journey regularly, so I've made a point of taking the car out once a month for a ten mile drive. My place of employment is in Mill Hill and if I go out, as I drink, I use public transport. In normal times, I'd be using the car 2-3 times a week to get to gigs etc, but I've done none since December 2019. I have not used the car at all apart from that, apart from a couple of trips to see friends who live outside Mill Hill.  It is very clear to me that the battery has failed as a result of recent cold weather.
If you are an RAC member or considering joining, I'd consider these points very carefully. It appears to me that the organisation is now more about selling things than supplying good service. The bottom line is this means that you may get overcharged as I feel I have been and you may get left in the lurch if you don't want to pay these extrotionate price, as I feel I have been. As I said, I paid the RAC £109 for a battery (and gave the bloke a cash tip). This is what Google tells me I could have got one for.
I don't like writing blogs like this, but I really wouldn't want anyone else to find themselves in the position I find myself in.

Email ThisBlogThis!Share to TwitterShare to FacebookShare to Pinterest
Click on Labels for related posts: Motoring, The RAC

I have to say you seem to be very naive, or live on a desert island, if you're not aware of what the RAC became many years ago. The RAC motoring assistance component was sold off and is now in the hands of the privated equity spivs of CVC Capital Partners. The company has been passed around several city spiv organisations, the latest being CVC.

Basically, these orgainsations couldn't care less if you're alive or dead or are a customer. These malignant spiv organisations exist solely to make yax-free money for their partners and everybody else in the world can go hang.
https://en.wikipedia.org/wiki/RAC_Limited

Well if the idea is to make money, it is a rather poor way, because I've cancelled my membership and will not be coming back. Generally, if someone provides a decent service, I stick with them. They've been OK up until this year.