Ok, first off, it's pudding not desert. I am always massively suspicious of people who call puddings desert. When I was at school we had school diners and they were always followed with a pudding. On Sunday we had a roast and we'd always have a pudding with it. What my mum prepared was pretty much based on how well the family finances were doing. I have to give a hat tip to Mr Robert Elms at BBC Radio London who inspired this list. He mentioned that he loved tinned peaches. He also mentioned that his mum did a wicked Bread pudding. This made me all nostalogic. Both of these dishes were a massive part of my youth. I thought this warranted a Saturday list. 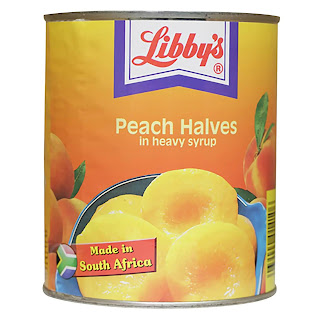 1. Tinned peaches with Carnation milk. This was our default pudding. Occasionally Mum would try custard or real cream. None of these were right. The tin would last two weeks. I feel like a bad parent, as I've never given my kids these wonderous treats.

2. Bread pudding. My mum was a one for a bargain. If she managed to pick up a loaf going cheap, she'd make a bread pudding. This involved bread, brown sugar, whatever plonk she'd decicded was going off and raisins/sultana's. This would be baked for hours. The whole house would smell of booze and sweet fruits. Often this too would be topped with Carnation milk. This was a midweek treat, usually following something like fried eggs and potatoes. My Dad demanded meat every day, however he had a sweet tooth, so this would placate him, if Mum decided the household finances coudn't afford steak.

3. Ambrosia Tinned Rice Pudding. This was one of my favourites, especially with a big dollop of raspberry jam. When I was about six, my sister decided to make some rice pudding. My mum came in and asked what she was doing and she blamed me. To this day she vehemently denies making the rice pudding, but the truth is that I was far too lazy to do such a thing and I knew that tinned rice pudding was far better anyway. My mum occasionally made rice pudding, but it wasn't really that marvellous. She'd put nutmeg on it that made it taste funny. If you see my sister, do ask her why she made the rice pudding. She likes that!

4. Apple Pie with Custard. This is my favourite ever pudding by a country mile. Our next door neighbour Mrs Grover had a large tree that produced cooking apples. She'd give mum a bag in the winter and she'd make apple pie. It was wonderful. We'd have custard with it Bliss! Sadly when Mrs Grover died and the house was sold, the vandals who bought it chopped the tree down.

5. McVities Cherry pie. My sister Caroline worked as a child model. She was chosen to be the face of McVities pies. We got a free box of pies as part of the deal. I didn't really like their apple pies, they had a sort gloopy chemical flavour. However the Cherry pie was wonderful.  My sister was not overly keen on being called Pie face by me though. I must add here that when I was a week old and she was four, she got me and tried to flush me down the bog, as she wasn't to keen on no longer being the centre of attention, so I never felt too bad about calling her pie face. We get on very well these days, although she does tell me that her recollections of many childhood events are very different to mine.

6. Christmas Pudding. Now my sister will probably tell me I've got this all wrong (as she regularly does), but until around 1970 Mum would make her own Xmas puddings. This would involve soaking the sultanas in (the cheapest) Brandy for weeks. At some point around 1970, probably when Mum had cancer, she gave up making the puds and we started buying them. It wasn't the same. As a side note, mum would put old sixpences in the pudding, and it was meant to be lucky of you found one. At Xmas dinner in 1961, she put five in. Her sister Audrey and her husband Michael came for dinner. Only three sixpences were found. A month or so later, Audrey excitedly told mum that she was pregnant. Audrey loved kids and siad it must have been the lucky sixpence. Mum then told her that she too was pregnant, so she must have eaten the other lucky sixpence. My cousin, the rather wonderful Anita Shaw, is a genius and a very good comic, she was even Welsh Woman of the year. Audrey always ascribed her success to the lucky sixpence. As I was a dyslexic, good for nothing punk rock guitarist, my mother never really felt the same.

7. Raspberry Ski Yoghurts. When mum was going through the worst of times with her cancer, she couldn't really eat, she was incredibly weak and she couldn't really keep food down very easily. The doctor advised her to drink as much Guinness as possible and eat yoghurt. As a result, we started to buy a lot of ski yoghurts.  Mum liked the Strawberry, Dad liked black cherry and I liked raspberry. At the time I absolutely loved it, but now it just makes me feel sad and nostalgic. As I don't really do dairy any more, I don't miss it.

8. Blackcurrant cheesecake. As mum recovered from her beush with death, she started to cook a little bit more. However she no longer could be bothered making the complicated puddings of our youth. One day she discovered packet cheesecakes. She could knock these up in five minutes. Dad loved them as they were sickly sweet. When I was a kid these seemed wonderful. Now the mere thought of such gloop turns my stomach. I can remember discussing these with my Mum back around 1995. Mum was lactose intolerant and she told me she always secretly resented making them, but as it made Dad happy, it was worth the effort. She told me that she'd never really liked any puddings apart from the Bread pudding and that was because it was full of alcohol. She said after she'd had cancer, she'd decided that if she had to make puddings, she'd make the easiest, cheapest ones possible. That seemed to work for everyone.

9.  Christmas Cake. As a kid, one of the ways we knew Xmas was coming was because Uncle Harry would turn up with one of his special Xmas cakes. Uncle Harry was a larger than life character, a member of the Magic Circle, former Mayor of Southport and cake maker to Queen Elisabeth. Mum confided to me later in life that Harry would post Her Maj a cake every year and recieve a letter saying how much Her Maj had enjoyed it. Mum reckoned Liz fed it to the Corgi's or her horse.  In fairness that was not nice, as Harry's cakes were pretty wonderful. Harry moved to Australia in the 70's and after that we never had a decent Xmas cake.

10. Crepe Suzettes. I finish with these. They were not made by Mum. Dad would make these when Mum went away. I loved it when Mum went away with my Sisters. Dad would cook. Dad was a brilliant, if technically limited cook. Whilst Mum could make anything, Dad had his specialities. When Mum was away, these all got reeled out. Bacon and Tomato sarnies for breakfast. Whilst Mum would buy the cheapest bacon, Dad would get the best from the butcher. Lunch would be a pork chop and supper would be a great big steak, followed by Crepe Suzettes, set on fire with copious amounts of brandy. Often Dad would take me to La Katarina restaurant if he couldn't be bothered cooking. The steaks and the crepe's were even more amazing there. Dad had a mate who was an old priest, called Father Traynor, up at St Josephs College. He'd often join us. Both Dad and Fr Traynor (who'd been a Missionary in Kenya) were great stroytellers and amazing company. I'd just sit in awe listening to their stories and enjoying the delicious food. One thing I recall is that whenever Dad got a bottle of whisky or brandy, he'd get Fr Traynor to open it and exorcise the demon from the bottle. I recall Fr Traynor doing this once at La Katerina, much to the delight of the bloke who owned it. I seem to recall, although I might be wrong, that when he opened the bottle, he'd light it and the excess alcohol fumes would go up in a puff of flame. His tipple was Johnnie Walker Black Label, which Dad always kept a copious supply of. When the crepe's were made at La Katerina, there were huge flames from the brandy. I recall Fr Traynor stating that there was a lot of the 'demon spirit' in that Crepe. He didn't seem too concerned. I think they were the most wonderful crepe's I've ever had. I've had them a few times elsewhere and they've always been a disappointment. Mind you, I suspect that if you bring a Priest to a devoutly Catholic Italian restaurant, you will find they are not ungenerous with the Brandy on the Crepes.