If the Barnet Tories can't get this right, why would anyone cast a vote for them 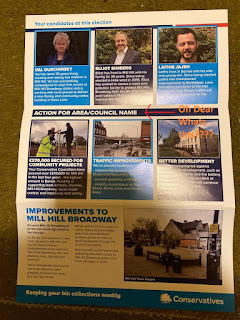 Yesterday we had a leaflet, the first, through the door from the local Conservatives. If elections were not a serious matter, it would be hilarious. It seems that despite having untold cash for paid delivery services etc, they can'teven get the simple basics right. They haven't even mastered the art of basic ''cut and paste" document writing. I don't know if any of the candidates bothered to check the document, but they completely forgot to add the words 'Mill Hill' in the box which says "ACTION FOR AREA/COUNCIL NAME". As I was walking home from work, a neighbour collared me and showed me. They thought it was hilarious.

They then asked for my reaction to their claim. This was where it got rally amusing.

Each of the candidates made a serious of highly dubious claims. Lets start with the redoubtable Val Duschinsky, the only Mill Hill Councillor to stand again (John Hart was put out to pasture as he's in his nineties and I've no idea why they shafted Golnar Bokai, who at least used to pay for the Xmas tree in the Town Square).

Lets start with her claim that she lives in Mill Hill ward. She doesn't, she lives in Hale Ward. She claims she's deliverd step free access to Mill Hill Broadway. She hasn't. It is due to be installed in 2024. but I have been told this may not happen due to lack of funds. You simply cannot claim you've done something that may never be delivered. It is like the cheese shop Matthew Offord MP promised Mill Hill in 2010. One day it may turn up, but it will be no thanks to him.

Val claims she is working with local groups to deliver a new community centre and library for Daws Lane. She's been working on this since she was first elected eight years ago and sadly it has hardly progressed at all. I've been involved in the groups she's worked with and know just how hard it is to get her local conservative association to do anything.

Then we have Elliot Simberg. Elliot is a nice guy, he is the only Mill Hill Tory that lives in the ward and I'm not going to say nasty things. I like the sound of the pollution barrier he's pushing for and if the Lib Dems get elected in Mill Hill, this is something we will push strongly for. There is nothing wrong with nicking your opponents best ideas. I've actually discussed it with Elliot and we've agreed we will support each others efforts whatever the outcome. As to him pushing the Mayor of London to improve Mill Hill Circus. I was surprised by this. Most locals would prefer the Mayor to sort out Apex Corner roundabout, which is a nightmare and should be a priority. This would be far more popular in Mill Hill.

We move on to Laithe Jajeh. I am quite appalled by what he's saying. Laithe and Elliot are both Hale Councillors. Elliot has worked on the pollution barrier as this is on the Hale/Mill Hill border. For Laithe to claim he's sorted out Burtonhole Lane is totally bizarre. This is not in his ward. Why haven't the existing Mill Hill Councillors been doing this? Has Laithe been working in another ward in a cynical attempt to curry favour to secure what he thought was a safe seat? Why has he neglected the voters who elected him in 2018. These improvements will come as news to locals. I've been in constant contact with the Council over issues on Burtonhole Lane, attempting to get the council to enforce the law on parked vehicles on the pavement etc. Here are just some of the pictures I've shared with the council. I've had no support from any councillor, despite having copied the Mill Hill Councillors in on numerous occasions. I've sent over 100 emails on matters around the lack of enforcement at the NIMR site. For a Councillor from Hale to claim he's sorted things out is quite disingenious 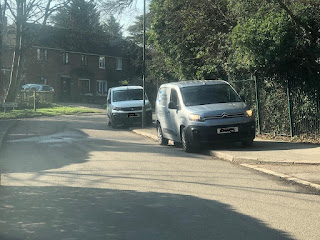 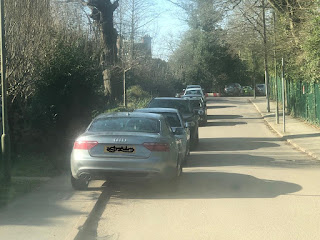 I think any reasonable person will take his other claims with a pinch of salt.

As to some of their other claims. I was intrigued by their claim they would 'prevent speeding on Millway'. This is my road. I suspect that their method is by constant roadworks, pot holes and utilities works. Millway used to have road humps that were installed by the Lib Dems when we ran the ward. The Barnet Tories ripped them out. That is why there  is a problem with speeding.

The Tories also claim they are against 'inappropriate developments". They have controlled the Council since 2002. You only have to walk around Mill Hill to see how successful they've been. They claim they've opposed all green belt development. This is simply untrue, having supported Saracens redevelopment and Hasmonean School. They claim 'these are special exceptions', but you cannot claim you oppose all developments then support the ones you like.

As to their claims about securing funding for Mill Hill. Mill Hill is one of the largest, most populous wards in the Borough. By default it should receive a larger amount of funding than other wards. There have also been some long term projects etc that have come to fruition. It has more roads etc than smaller wards, so will see more money spent on them. The concept that this is because the local councillors have done a good job is absurd. In actual fact, one reason they have spent so much money on roads is because they are so bad at managing them. The Lib Dems three point plan explaions how you could spend less and get more. If I am elected, I will not boast about how much I've spent on roads. I will boast about how much I've saved on repairs and how much more I've delivered. Watch our short film that explains our plan (and if I don't get in, I give Elliot Simberg full permission to nick the plan, just as I'll nick his pollution barrier!).

If you want to know how competent and trustworthy the Tories are you can do two things. You can look at their Leader, Boris Johnson or you can read their leaflet.