Was the former Chief Constable of Barnet shafted by Boris?

I was horrified to read a story in this mornings Guardian, stating that there have been allegations that Boris Johnson has intervened to prevent former Barnet Chief Constable Neil Basu from being selected as the head of the new National Crime Agency.  The reason, according to the report, is that Mr Basu was previously critical about the comments of Boris Johnson on race, such as his 'Piccanini Smiles'  and 'Looking like letterboxes' statements. 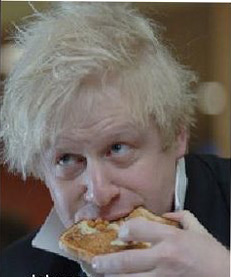 By all accounts, Mr Basu is the most qualified man for the job and it looked highly likely that he'd get the job, which spurred the action. It is not the first time that Mr Basu has fallen foul of Conservatives. Back in 2010, the then Tory Barnet Borough Safety Officer, disgraded Ex Mayor and convicted woman beater Brian Coleman had a pop at Basu, trying to get him into trouble with his boss at the Met. Apparently, he was "spreading doom and gloom" about the effects of Police budget cuts. Mr Basu was right and Coleman was wrong. The current epidemic of teenage stabbings is one symptom of what has happened, as Police were cut and outreach was wound down.

I met Mr Basu a few times, he was always polite and impressive and had a good command of what he was doing. He was approachable and I interviewed him on occasion for this blog. What impressed me most was that Mr Basu was not afriad to tell me "No you are wrong". Whilst many people say this, he then explained why I didn't understand the role of the police, what you could and couldn't do and why what seems simple is often highly complicated. He didn't talk down to me, just sought to make sure I properly understood the challenge, so I could write better blogs on the subject. I got the reeling that Mr Basu would behave the same with a blogger, a schoolchild or the Prime Minister. The people who are best at their jobs don't talk down to people, are on top of their brief and are happy to share and inform.

Although I'm not qualified to say this about Policing, from my meetings with Neil Basu, he'd be a great leader of any organisation and given that the selection panel seem to agree, it strikes me as verging on criminal negligence to block him because he tells politicians things they don't want to hear. If, like me you want the Metropolitan Police to be well run and to do it's job properly, you should want the best man for the job. It appears Boris Johnson has stopped this, simply because he doesn't like someone telling him a few home truths.