"If you have never put Rebel Rebel on a jukebox and when it gets to the Chorus sang "Hot Tramp I love you so"  then kissed someone you fancy the pants off, you simply have never lived" 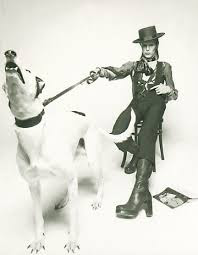 I am sure there will be millions of tributes to Bowie today, he touched millions of peoples lives. Unlike most musicians, I am sure that most of these, especially from musicians, will be just a bit different from the run of the musician eulogies. This is because Bowie was so much more than a musican. For many of us, he gave us an identity. Those of us who spent our teens in the 1970's, and didn't feel we really fitted in, Bowie was an icon. He gave us the inspiration to live our lives in the way we wanted and to make the music we wanted to. His legacy cannot be summed up in mere words. Yesterday I wrote a blog on how to write a hit record. Two of the examples I used were "Rebel Rebel" and "The Jean Genie". Bowie made extraordinarily good music, he had an extraordinary look.

Last year we took the family to the V&A museum to see the Bowie exhibition. It was fascinating. I cannot think of another musician who I would be quite so interested to see such a collection. I first became aware of Bowie with Space Oddity. As a child I was obsessed with the rockets and the space race. I saw in Bowie a kindred spirit.he clearly share dmy fascination. This was confirmed with Starman.

As I moved into my teens, The Jean Genie was the first pop single I bought. The song is simple but a work of genius. It was also a song I could play on Guitar. Bowies lyrics also were haunting and seemed to say the things I was thinking. At Finchley Catholic High School, all of a sudden, a whole generation of hardnuts who were sons of navvies from Kilburn started dying their hair orange and wearing eyeliner. The school simply didn't know how to respond. No one was breaking the rules because they'd not bothered to make the rules to cover such fashion statement.

For me only Bowie and the other sadly missed glam superstar, Bolan mattered. I simply didn't feel any kinship with any other musician. I liked some of the Stones music, and a few other artists, but only Bowie seemed to matter to me and to speak for me. I can remember a long, animated converstaion with my great friends Richard Wenham and Luke Albanese as to whether Young Americans was any good and whether it was a good change of direction. I felt a bt betrayed, but Richard was quite right to say "you have to change, you can't simply keep writing the same song". Perhaps this was a lesson Bowie gave us all.

Then punk hit. For many of the bands, Bowie was an inspiration. Whilst the likes of Led Zeppelin were dismissed as boring old farts, Bowie was never tarnished with that brush. How could he be? As punk was in full flow, Bowie was making his Berlin albums of Low and Heroes. It seemed that he'd gone on holiday and used the experience to channel something special.

I guess for me, Heroes was the last Bowie album I really got. Bowie was the foundations for everything else I got into musically. I saw Bowie a couple of times, on the Glass Spider tour and as Tin Machine. Both shows could not have been more different. he was a brilliant performer. As I've never been a lover of stadium gigs, I wasn't overly keen on the mega tours, but I am glad I made the effort to go to Wembley for his show. I've only ever bothered to see him and the Stones at Wembley and that was just to make sure I'd seen them.

Bowies music has been the soundtrack to my life. I think Station to Station is my favourite Bowie album, I just think Golden Years is the coolest track ever made. When I was a teenager and I wanted to tempt attractive young ladies into naughtyness, that was always the first album on the turntable. It was a surefire winner. For that alone I owe Bowie a huge debt of gratitude, but his influence on me and my band as a songwriter and a fashion icon has been incredible. Yesterday, I was recording our album with the False Dots. As ever the subect of Bowie came up in conversation. It always does.

David Bowie has been a huge part of my life. I owe him a huge personal debt for the inspiration he has given me. I feel like he is a personal friend, even though I've never met him. His music has been there all the time. Through the highs and lows. He always had something to say to me. He always had some inspiration. I will miss him. Here is Golden Years.

Rog, I so love the way you have summed Mr Bowie's influence on your life. When I was a gawky, self-conscious teenager, the odd one out, the troublemaker, the kid from the children's home. His lyrics were my friend, he somehow understood the awfulness of my life but gave me hope. I had somewhere to vent my frustrations, somewhere to rebel, by listening to him. He helped form my identity too, amongst thousands. But when I was 13 and in the music room, he was all mine, my very special friend.