By Mark Amies (AKA @Superfast72)

Some of you may be aware of my occasional rants on Twitter (on my handle @Superfast72) about the dear old Railway Hotel in Edgware. This Grade 2 Historic England Listed building served the people of Edgware for nearly eighty years, until it closed around 2008. Since then it has sat boarded up, and unloved. In recent years its grounds have been used as a car lot, a car wash and as a turnaround for coaches going to Eastern Europe.
I don’t know the exact year it was finished but I believe it was the late 1920’s. I will allow the author of ‘Modernism in Metroland’ (http://www.modernism-in-metroland.co.uk/  - check it out, it is very good) to describe it better, “…the Railway Hotel in Edgware by A.E. Sewell, the prolific in house architect for Truman Hanbury Buxton and Co. Defiantly neo-Tudor, with barge boards, half timbering and bay windows.

I moved into the area in 2013 (although I knew the area well enough before then), and I was really sad to see this once important local asset decaying and neglected, and so I kept an eye on it , occasionally taking photos and sticking them on my Twitter account, really just to keep it from being forgotten (if you search the tag #railwayhoteledgware , you will see some of them. I recall talking to the owner of the Edgware Music Shop a few years ago, and he had told me that the building had gone through a succession of owners, many of them eventually frustrated by the planning restrictions of the Listing Status.  But you see, that is why heritage buildings are listed – to stop them being ruined by insensitive and unsuitable renovations. 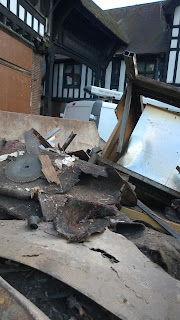 There had been talk of it being converted into a hotel again, and with the land behind it, that would probably have worked well….except who is going to come and stay in a heritage hotel in Edgware these days? Back in the day hotels of this nature served the needs of travelling salesmen, and being next to the original Edgware station ( that sat where Sainsbury’s and Premier House now are), it would have served very well.  There had also been shadowy rumour that in fact , what a developer had wanted to do was to demolish the building, buy up the old Post Office next to it,  the ‘Forum’ flats and shops that create an L shape onto the Edgware Road , and the land behind ,and let it fall into disrepair. Then the whole chunk of land could be turned over for a high density housing development.
Sound familiar? Very much the sort of thing Barnet RE are really enthusiastic about. If you combine that with the similarly dishevelled-looking Masons Arms pub nearby,  that’s another attractive ‘road corner prime position’ for a developer.  It all points to what we have seen so much of in North West London, vast areas of land freely handed over to unscrupulous developers, to build complexes of human rabbit hutches – all waived on by a Government that says we desperately need more housing. Yes, we do  - we need affordable housing, suitable for families to live in, not luxury flats that are unaffordable or future slums that look terrible after 18 months.
So…the saga of this building carried on, no pub chains were interested – believe me I tried to get them interested. I contacted Fullers, Antic and Youngs, all known for taking on heritage buildings. All declined. Sadly the area was the biggest issue for them. Edgware clearly didn’t tick the boxes, and let’s face it do you blame them? Edgware has fallen down in the last ten years, in no part due to Barnet Council effectively deserting the town like an unwanted child. It’s only desire to rubber stamp unsuitable developments like the revamped Premier House on Station Road. 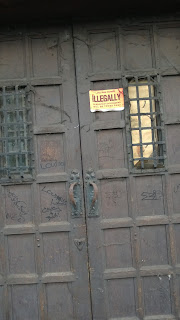 However on Thursday evening I had a few emails from a person who had been in contact with me about The Railway Hotel before. They had seen my tweets and got in contact. Their enthusiasm for action was noble, and it was great to see at least another human being in the area was keen to look out for the building.  The thing about the recent email was it showed activity. “At last!”, I thought, but as I read on I got worried……very worried.  Apparently the building was being cleared, in preparation for flats on the upper floors , and a restaurant on the ground floor, and of some note, an ‘extension’.  Don’t get me wrong – it is great to see the building will be put back into a working role , rather than neglected. However the detail was showing that the clearing was fairly ruthless, and included the breaking up of concrete , the process of which was apparently causing the building to shake (remember we are talking about an eighty year old building with a  great deal of timber and glass, built before building regulations, and put up by guys wearing flat caps and smoking Woodbines).
I took a note of the building company and nowhere on the signage did it mention that they were specialists in heritage restoration. In fact it looked to me like it was just whoever turned up first in a local web search.  I have no reason to doubt the abilities of the builders but I would expect something more in keeping with the listed status of The Railway Hotel.

Now, here is where things get interesting. I had the time the following day (I had to wait in for a boiler repair guy), to do some emailing and calling.  Two of the people I contacted were Roger and Mrs Angry. I also contacted Historic England at their London Office, the Senior Planning Enforcement Officer at Barnet Council, the Twentieth Century Society , the three Barnet  Councillors for the ward the Railway Hotel sits in, a contact at GetWest London media, BBC London , and probably a few more.  A bit excessive you think? 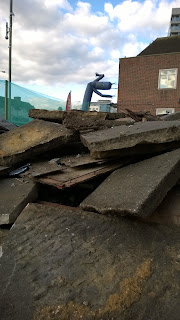 Well, you can think that, but back in 1980, over the course of the August Bank Holiday weekend the fabulous Art Deco Firestone Tyre factory on the Great West Road, in Brentford was demolished. The listing that would have stopped this horror from happening was due to be served on the following Monday. Too little, too late. There is the example that a great many lovers of heritage buildings at risk will use. It would appear that my efforts may not have gone in vain. Despite the Barnet Planning Officer being rather shy , Historic England did get back to me that morning to inform me that “…. Historic England have not been consulted on any recent applications for the site”.
I decided I would try, for the third time to call the shy Planning Enforcement Officer at Barnet, and they actually answered. In a tone and manner that I can only describe as emotionally detached, I was told that her manager was on the way to The Railway Hotel as we spoke to check what was happening. Does that not sound a little like negligence?  Barnet Council have a duty of care by law over the Railway Hotel, or indeed any listed building in its territory.
I don’t know if my hasty intervention, prompted by a well meaning individual ,( who I will not name out of respect), will save the Railway Hotel from a fate worse than death. All I can do is to keep it in the spotlight, so that people like you, reading this rather long article will be aware of what is going on with our shared built heritage. These buildings are more than just bricks and mortar, they are places where couples met, and later married, where events that shaped people’s lives took place – a pale youth’s first pint in a pub, a game of darts or pool that meant a lot, a wedding reception, a wake, or simply just a great night out, or lots of great nights out. These buildings are part of an area’s identity, its history. If we let them get desecrated, or demolished then we are letting a little bit of our collective soul be wiped from the present  and left only as a faded memory.

If The Railway Hotel gets restored to just a quarter of its former self, I will be delighted. If it provides a meaningful purpose for the local community (as it once did), even more so. If it provides someone with a much needed home, brilliant. But whatever happens it needs to be done with sensitivity, and within the boundaries of the listing status that was placed upon it.
Now get me a pint!!

Thank you for the update on the fate of The Railway Hotel. I've lived in Edgware all my life, and it is one of the few buildings that defines Edgware. I would love to see it back up and running as a pub - or similar.