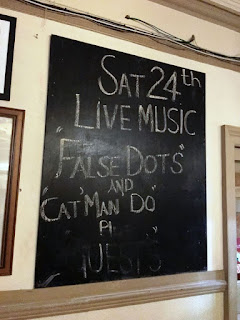 This is a subject we've touched on a few times, but as we've learned that there is a proposal to demolish the Midland Hotel in Hendon and replace it with flats, I thought that this is well worth revisiting. Regular readers will know that I play in a band called the False Dots. We have done dozens, if not hundreds of gigs in the Borough since we formed in 1979. Many of the venues we've played have closed down. Barnet Council talked about submitting a bid to become the London Borough of Culture. If they seriously want to follow through on this bid, I will support it, but only if they reverse this cultural pillaging of our music venues. Here is the full list, with dates of gigs at closed venues.

18th February 1981 - Orange Hill Senior High School, Burnt Oak. Just before I left the school, the band performed a gig in the school hall. Within a few years the school had closed, subsumed into Mill Hill County High School.

15th March 1984 - The Bald Faced Stag, Burnt Oak. This pub had a terrible reputation, but in the Spring of 1984, a new landlord took over, with a brief to improve the reputation of the pub. He decided to transform it into a music venue. We had a residency there there, which were great. A guy called Tony Byrne video'd one, but I lost touch with him. If you know Tony, tell him to get in touch, I'd love to see it again. The Stag is currently being demolished.

19th May 1990 - St Josephs College, Mill Hill. At the time, this was a missionary college. The students had  a common room, which was used for regular gigs (mostly Irish & folk). We were asked to play on the Evening of the last ever Garden Fete in the grounds. The Princess of Tonga was the guest of honour and it was a delight to see her boogieing to the Dots! The college is now luxury flats.

20th April 2002 - The Red Lion, Colindale. The False Dots took a sabbatical between 1990 and 2001, mostly due to my lack of time and inclination as I was getting married, building the business and managing The Sway, an indie band. When my business partner, Ernie Ferebee died in 2001 of Pancreatic Cancer, we decided to do a one off benefit gig for Ernie's family at The Red Lion. To my amazement, I enjoyed it immensely and the second incarnation of the Dots sprung into life. Sadly, whilst the Dots have persisted, the Red Lion is long gone.

2nd November  2002 - The Mill Hill Sports Club. This began a long association with the Sports club. We played all sorts of gigs, mostly for the Mill Hill Music Festival and for MacMillan Cancer relief, famously Kate Nash supported us at one, a month before her first single was released!

2nd October 2004 - The Green Man, Barnet. Fil Ross (long time guitarist/bassist with the Dots) was promoting a Rock night for new bands at the Green Man.

Of course, the Dots have played many venues that are still open in some shape or form, but for a band playing original material, the London Borough of Barnet has always been a challenging area to find gigs. We have been lucky with the Midland Hotel, which as been a stalwart supporter. The Chandos Arms and The Bohemia are also supportive. There are a list of venues that we wanted to play that have also shut. Perhaps top of this list was The Torrington. Sadly for the Dots, the promoters were more into blues and soul than our brand of rock. As it was such an iconic venue, this was a big gap for us. Another venue which we never got to play, was The Production Village. This was not for want of trying. Three times, we had gigs booked, only for the band to split up a week before. In the end, we thought the venue was a jinx, so avoided it. Some of the venues, such as Harwood Hall, do have music, but not Rock.

I sincerely hope that Barnet Council see sense and do not add another seven False Dots gigs to the list by closing The Midland Hotel.

Just for the record, as part of the Mill Hill Music Festival, we've lost the following Mill Hill Venues over the 22 years of the Festival plus a list of some of the artists I have played with/engineered/watched at them
The Mill (pub) - Soul Tax
The Angel and Crown (Pub) - The Sway, The Alan Warner Band
The Bell (pub) - The False Dots, Texas Flood
St Josephs College (Educational establishment) - The False Dots, The Apostles
Mill Hill Sports Club (club) -  The False Dots, Alan Warner + Many MHMF
Holcombe House (Educational establishment), Stacey Kent, Acker Bilk, John Dankworth (MHMF)

Finally, I must mention the Methodist Church Hall in Goodwyn Avenue. This was the venue I first saw the Polecats play, within a year they had a record deal. That is why we need grassroots venues and why we need the Midland Hotel.