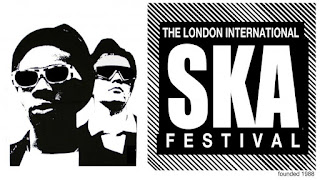 The Save London Music Campaign has primarily been concerned with preservation of the venues, studios and creative spaces in London. None of these would have a purpose without music promoters. Good promoters have, over the years, defined the shape of the London Music scene. Generally the very best combine a love of music, a passion for a specific genre, a strong focused vision and a good degree of business acumen.

One of the very best of these is Sean Flowerdew. Back in 1988 Sean set up the London International Ska Festival. Anyone who loves Ska, Reggae, Calypso and Rhythm and Blues will have in some way had their lives touched by the Ska Festival. Since 1988 the festival have been bringing legends over from Jamaica, showcasing local talent and keeping the genre of music on the map. Many amazing artists, who had years of struggle have seen their careers revived by the efforts of Sean and his team. I recently saw the legendary Jamaican artist Derrick Morgan at the Jazz Cafe. The resurgence in his career was a direct result of the support from the festival.  Amazing London bands such as the Potato 5 have also been kept on the map. This year the festival saw legends such as Ken Booth and Desmond Dekker appearing.
The very best radio shows in London regularly feature contributions from Sean and artists appearing at the Festival. Robert Elms on BBC London has been a stalwart supporter. Since 2011, the festival has been operating under a huge cloud. Despite it's amazing track record and huge influence, there were severe perational issues for the organisers that year. The festival took a huge financial hit and despite the best efforts of the organis

ers, has been hamstrung ever since.
The debts have held back the festival ever since, ambitious plans have had to be scaled back and the organisers have had the stress of juggling the finances simply to keep going. Many of the expenses for the festival are up front and the income doesn't get counted until after the last act finishes, which means that there are constant stresses for everyone  It is a huge testament to Sean and the team that they have managed to provide such amazing line ups and deliver so much.
The situation has reached the point where Sean has taken the extraordinary step of appealing to the many friends and fans of the festival to help out. He has issued the following statement. There is only 24 hours left to save the Festival, so please make a donation today.

" I founded The London Intl Ska Festival in 1988.  Since then we've celebrated all things ska, from its roots in mento, calypso and rhythm & blues and onward through its evolution into rocksteady, reggae, dub, 2 Tone, skapunk and beyond.
Since 2011 the festival has been operating with substantial debts, which despite some great support and fundraising still total over £50,000.  In the last 8 years, although I haven't ever taken a penny from the festival or been paid for any of the work, I have been able to keep the festival going year to year and paying off debts as I go.  This unfortunately has taken its toll and I can no longer afford to fund the festival by myself.
So I'm reaching out to ska lovers around the world, to people who see the importance of our historic festival and to all the people who have enjoyed the shows over the last 30 years.
The aim of this crowdfunder is to try and #SaveTheSkaFest and clear the historic debts once and for all.  Then The London Intl Ska Festival can move forward and continue to programme world-class and world-exclusive shows. You can help in a number of ways.
You can donate using this campaign, or purchase any one of our rewards which include badges, our compilation CD & LP Rudies All Around (featuring 18 fantastic bands from 13 countries), or tickets for any one of our events (all listed in the rewards).  I will also be adding some more rewards next week.
Over 30 years we have hosted some of the greatest names in the genre including 2 Tone members from The Specials and Madness, plus The Selecter, The Beat, Jerry Dammers and Rhoda Dakar.  We've had Jamaican legends: Prince Buster, Alton Ellis, Delroy Wilson, U-Roy, The Skatalites (starring Tommy McCook, Roland Alphonso, Lloyd Knibb, Lloyd Brevett, Dizzy Moore and Lester Sterling), Lee Perry, Horace Andy, Desmond Dekker, Ken Boothe, Doreen Shaffer, Derrick Morgan, Laurel Aitken, Keith & Tex, Ken Parker, Rico Rodriguez, Derrick Harriott, Bob Andy, Marcia Griffiths, Dennis Alcapone, Dave & Ansel Collins, The Pioneers, The Clarendonians, Otis Gayle, Owen Gray, Freddie Notes, Stranger Cole, Ranking Joe, BB Seaton (Gaylads), Twinkle Brothers, Clive Chin (Randys), Gladdy Wax sound system, Vin Gordon and Channel One sound system.
And 100s more including; Steel Pulse, Misty In Roots, Judge Dread, Bitty McLean, Caroll Thompson, Christopher Ellis, Dreadzone, Zion Train, The Skints, Pama International, Don Letts, David Rodigan, James Hunter, The Pietasters, The Toasters, African Head Charge, Dennis Bovell, Gentlemans Dub Club, Babylon Circus, Dub Pistols, Brinsley Forde (Aswad), The Hempolics, Jazz Jamaica, Mad Professor, The Loafers, Potato 5, Hotknives, Ska Cubano, Wrongtom, Manasseh, Sonic Boom Six, Chris Murray, to name a very few.
We have hosted shows in iconic London venues including; the Victoria & Albert Museum, The Forum, 100 Club, The Astoria, The Brixton Fridge (now the Electric), O2 Academy Islington, Islington Assembly Hall, Dixie Queen paddle steamer, Camden's Dublin Castle, Jazz Cafe, Dingwalls, Electric Ballroom and Barfly.
I would love to continue the festival.  The next one is in the diary for 18-21 April 2019.   If you'd like to see The London Intl Ska Festival continue please support if you can afford to and share this campaign with anyone you know who loves ska!"
The maths is quite simple. If there are 2,000 people on the planet who think that the London International Ska Festival is a massive asset to our city and worth saving, and are willing to stump up a tenner, the Festival can clear its debts and continue to do amazing things. The guys who organise it and have been for years do an amazing job. If you think the festival is worth saving, for the price of a couple of pints of beer or cappucino's in a London Coffee shop, then please do your bit. Without promoters like Sean, London would be a poorer place.
To save The London International Ska Festival
Click here to Save The SKA Fetival