I am indebted to a good friend of this blog, Samuel Levy for the amazing pictures here. Regular readers of our Tweets of the week will know Samuel regularly features. He is best known for his pictures and blogs featuring local (and not so local) birds. Samuel recently tweeted a picture of a Wasp spider that caught my imagination. I asked Samuel if he'd be so kind as to send me a few pictures of other interesting insects that you may happen upon in the Valley. I was not disappointed I hope that you enjoy these and if you have your own, please share them with us.

Lets start with the Spider that started the whole thing off. This is Samuels pic of a Wasp Spider in the Totteridge Valley 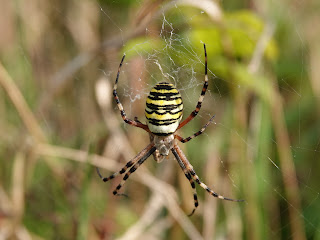 Putting the scary appearance aside, this is a magnificent spider.   The Wildlife Trusts website says -
"The wasp spider is a very large, colourful spider that is a recent arrival in the UK from the continent and has slowly spread over the south of England. It builds large orb webs in grassland and heathland, and attaches its silk egg-sacs to the grasses. The web has a wide, white zig-zag strip running down the middle, known as a 'stabilimentum', the function of which is unclear. Mating is a dangerous game for males; they wait at the edge of the web until the female has moulted into a mature form, then take advantage of her jaws being soft and rush in to mate. However, many males still get eaten during this time." 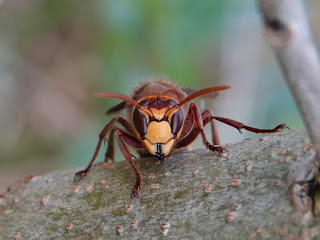 Whenever we hear the word "Hornet" we always imagine a terrifying large insect. However the Sussex wildlife trust are keen to correct this misconception. They say "There's little doubt that the European hornet, Vespa crabro, is a rather fearsome looking insect. But this ferocious exterior betrays a species that is in fact rarely aggressive. Unlike their infamous relatives, hornets are unlikely to disrupt your picnic. Their sheer size - between 2-3 cm's for workers and males, 3-4 cm's for queens - and riotous buzz can however make them an intimidating proposition. They're our largest and most impressive eusocial wasp species, displaying the very highest level of organisation of animal sociality and frequently more than doubling the size of our more familiar common wasp, Vespular vulgaris. Both belong to the order Hymenoptera, comprising bees, wasps, ants and sawflies. " They continue
"Hornets can of course potentially pack a punch. They harness a sting typical of their family group, though it's non-barbed and won't be pulled from the hornets body, unlike that of a honey bee. It's used predominantly in defence of the hive. The sting doesn't contain high levels of toxic species-specific compounds that tend to be wielded by invasive Asian hornets, and it's toxicity is on average lower than that of the honey bee, Apis mellifera. It is of course worth noting that stings can still trigger allergic reactions, and those susceptible to wasp venom will likely suffer the same from hornets. But the simple fact is that the European hornet is a docile creature, avoiding conflict and rarely displaying any form of aggression unless the nest is approached or the colony is threatened. It suffers from an undeserved reputation." 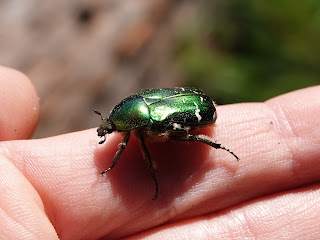 The UK Safari website says of the Rose Chafer
"Rose Chafers are one of our larger and more attractive beetles. The upper surfaces are an iridescent emerald green and bronze colour. The underside is a bronze colour. There are ragged white marks running widthways across the wing casings which look like fine cracks. Rose Chafers are surprisingly furry. Even the wing casings which look very smooth and shiny are covered in tiny hairs. Rose Chafers are usually seen in on warm sunny days feeding on pollen and nectar.
Their favoured plant, as their name suggests, is the rose. "
Meadow Grasshopper. 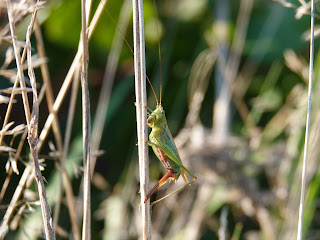 We often hear these but don't get to appreciate their beauty. The Wildlife Trust has this to say about them
"The Meadow grasshopper is a resident of mainly damp, unimproved pastures and meadows. Grasshoppers go through a series of moults, from wingless nymphs to winged adults, shedding their exoskeletons as they grow. Nymphs are present from April onwards, turning into adults in June who feed on plants and grass. Males can be seen displaying to females by rubbing their legs against their wings to create a 'song' - in the case of the Meadow grasshopper, this is a regular 'rrrr' sound. After mating, the eggs are laid in the soil in a pod, ready to hatch the following spring."
Willow Emerald Damselfly 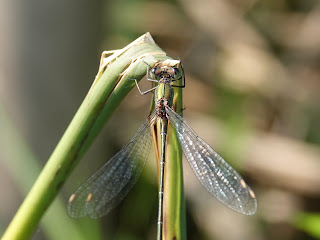 A non native species, seen recently around Darlands Lake, The British Dragonfly Society says of the Willow Emerald Damselfly
"Usually near ponds, canals or other still water with overhanging trees. Willow Emerald Damselfly has a characteristic habit of spending much time up in the trees. The eggs are laid into the bark of willow or alder."
They add.
Just a decade ago, the Willow Emerald Damselfly had only been reliably recorded in the UK on 2 occasions, in 1979 and 1992. A single individual was then recorded in south east Suffolk during 2007, followed in 2009 by a sudden boom of 400 records of the species from this same general area (SE Suffolk/NE Essex). Since this time, the Willow Emerald has spread rapidly across the south-east of England, gaining footholds in new counties on a yearly basis. The natural colonisation and spread of this damselfly in the UK is incredible. It is important we track the species in order to understand how it is spreading so rapidly and what might limit the species in the future. For this reason, the BDS have developed the ‘Willow Emerald Watch’ project."
The Barnet Eye finds the wildlife of the Totteridge Valley and the wider London Borough of Barnet fascinating. It is very much our intention, with a little help from our friends, to bring this to life in the coming weeks and months. Finally a very big thanks once again to Samuel for his amazing pictures. I learned something, which can only be good. I thoroughly recommend following him on twitter  at https://twitter.com/FinchleyBirder and on Instagram at https://www.instagram.com/samuelnature85/