You may be surprised. Pinch yourself. I have come to praise Brian Coleman, not to bury him. Don't get me wrong, can't stand the man. I will not forgive or forget the fact that he assaulted my friend Helen Michael and lied through his teeth about it to the Police, the truth only emerging following the release of CCTV footage. But if you look at the bigger picture, he tried to do the nation a service last May, when it became clear that Boris Johnson was likely to win the leadership of the Conservative Party. Brian wrote a blog, from the perspective of someone who worked closely with Boris for a number of years. Brian made it crystal clear that Boris was not fit for the job of Prime Minister. 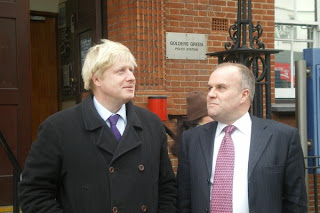 His blog highlighted many of Boris's key character flaws. Firstly that he is an appalling judge of character. The appointment and retention of Dominc Cummings is perhaps the best example of this. Brian siad

Boris was a poor judge of character . I lost count of the many so called "Deputy Mayors" and Senior Aides who passed through City Hall in my four years :Nick Boles (Head of Transition)  lasted a month , Ray Taylor (totally bonkers) lasted three months ,Tim Parker (on another Planet )  and of course Ian Clement (fiddled his expenses ) spring to mind . Then there were people with no experience of Local Government Munira Mirza (did not like being called "Dear" ) Isabel Dedring, Transport (hated and ignored by TfL Officers) Kulveer Ranger (who once cried on my shoulder because he had lost his Secretary ), Matthew Pencharz ( a nice boy but well out of his depth) . Pam Chesters , a good choice as health advisor but totally undermined by Boris when he ordered her to reinstate Mars Bars in the City Hall canteen.These inexperienced advisors are no doubt partly, along with Boris ego , the reason for so many failed and pointless Capital projects . Boris Island , the East London Cable Car , the Garden Bridge ..

Brian also warned us that Boris was likely to be a disaster at #PMQ's, something which has become a major problem for the PM since Sir Keir Starmer became leader of the opposition. Boris is getting absolutely murdered every single week and this is doing no good for the nerves and mood of the Conservative MP's. More of a problem is that the nation is starting to think our PM is simply not up to the job. Here's what Brian said, his words are rather prophetic.

His performance at the monthly Mayor's question time at City Hall was dreadful in the early days and to the frustration of Assembly colleagues ( including Kit Malthouse) did not really improve .

Another major problem is that Boris makes things up on the hoof. That is fine when you are campaigning, but when you are dealing with a global pandemic, it simply causes chaos that has resulted in major loss of life. The failure to read briefs and properly prepare for meetings and speeches is unforgiveable. Again Brian highlighted this

Boris just simply never read the briefs or prepared for his speeches . At one Lord Mayor of London's London Governance Dinner he could be seen scribbling notes on the napkin during the meat course.

A successful Prime Minister has to have a degree of empathy with the people they govern. If there is a major disaster, they have to be able to reach out the victims and make them feel that the government cares. Despite nearly dying of Covid, Boris appears to not have the slightest bit of empathy or compassion for the families that have lost loved ones as a result of his policy blunders. Again Brian flagged this up, detailing his complte lack of compassion for the victims of the 7/7 bombing.

At a briefing meeting held in Boris' Office in 2011 during the Inquests into the deaths of the victims of the 7/7 bombings I was telling Boris how the Fire Authority was having to spend a sizable sum on lawyers (as were the Met , TfL and everybody else involved ) not least because Mrs Justice Hallett was cutting up rough as Coroner when he suddenly said " I blame Tony Blair for all this , he started it with the Marchioness (Inquest) " Guto Harri, who was Boris' Head of Communications and at the time absolutely devoted to Boris , said " Oh Boris they are really for the families (of the victims) benefit " To which Boris replied "Fuck the families , Fuck the families !"  . I was having none of this and snapped at Boris  " You didn't have to write eight letters of condolence to families of your constituents or attend the funeral of 31 year old Lee Baisden ( a Fire Authority employee) who had been blown to pieces at Aldgate and comfort his poor widowed Mother " .

There is also Boris's relationship with the truth. Boris simply thinks he can get away with anything, the rules don't apply to him.  After the event described above, Brian notes the following

Brian also gave us an insight into how Boris copes with difficult situations. This quote is quite illuminating

At the Annual Lord Mayor's Banquet one year he told me the " only way to get through events like this Brian is drink all the alcohol on offer !"

If we weren't in the middle of a global pandemic and if we weren't about to leave the EU perhaps none of this would matter quite so much. I suspect that if we lived in a perfect world, where we didn't face threats such as Putin poisoning our citizens with nerve agents, with IS terrorists wanting to murder us all, with China seeking to economically dominate the global economy, with rogue regimes such as North Korea acquiring nuclear weapons, it may be jolly good fun to have such a man leading the country to entertain us. The truth is that we are in a global crisis and when we need allies, we have a Prime Minister who is totally unfit to be in charge. A man who has shown he has no regard for international law. I am quite bemused for his contempt for the EU Withdrawall Treaty.  It was Boris's government that negotiated it and signed it, if it is a danger to the UK, then surely it is his fault for signing it. Any problems are entirely the fault of the Prime Minister.

You may not trust my opinion of Boris, given that I've never been a fan, but Brian Coleman worked with him for years and is a staunch Conservative.