On Wednesday I published a blog which received the best reaction of any blog for many a moon. It was entitled "How the 70's was the decade where the British discovered food". I detailed how the culinary habits of the British underwent a step change in flavours and experimentation in the decade and things such as garlic suddenly became part of the British array of cooking ingredients (previously it was salt, pepper, brown sauce and mustard).
Some of the comments left on Facebook mentioned exotic dishes that we embraced in the 1970's. I thought I'd list my ten favourites. When I say my ten favourites, this is favourites as in, ones it seems amazing that they seemed exotic now!
1. Spaghetti Bolognese.
It seems bizarre now that a Spag Bol was ever seen as 'exotic', but I well remember the first time my mum cooked it. My Dad's RAF squadron had been stationed in Foggia in Italy in 1944, and he'd developed a love of Italian food and drink (far better than the flat rations the RAF had in North Africa). He told me a story of how when the RAF took over an Italian air base in North Africa, they kept all the Italian cooks etc on the staff and were the best fed airmen in the RAF for a couple of months. He taught us how to wrap the Spaghetti around the fork and advised me never to eat Spaghetti on the first date. I was about ten at the time. It was a bit of a revelation.
2. McDonalds.
This is another one that probably seems insane to anyone born after 1985 that anyone could see a Big Mac as exotic, but that is exactly what it was. When McDonalds opened its  restaurant in Golders Green there were mile long queues to by Big Mac and chips. It was seen as proper American burgers. We sort of felt that we'd become Starsky and Hutch if we ate McDonalds. I always thought the Golders Green branch was the first in the UK, but it was actually in Woolwich.
3. Rum and Raisin Ice Cream. 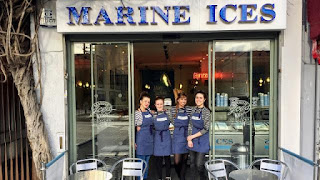 Oh dear ! Tears of nostalgia and the realisation I'm getting old have resulted from your blog !!
Vesta Chow Mein was a staple with us as it was so simple to prepare. And why we can't get Arctic Roll now I really do wonder; I loved it, in fact apart from Big Macs I loved everything on your list.