Environment Monday - Should Extinction Rebellion be classified as dangerous criminals?

There has been chatter in the media that XR will be reclassified in the UK as a criminal organisation. 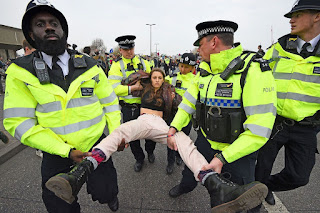 Whilst XR have caused major disruption during protests, there is a fundamental question we need to answer. Do we still believe in the right of assembly and  peaceful protest. The case that the commentators who support the ban have been making is that the civil disobedience has involved breaking various laws and lead to mass arrest. Drawing the line between what is a criminal activity and what is acceptable civil disobedience is always a very difficult thing to define in legal terms. Organisations such as the IRA and the UDA have a valid (you may not agree with their aims, but they are valid aims) political agenda, however their means clearly crossed into the criminal realm. Setting off bombs and shooting people can never be justified as civil disobedience, although it is sensibly set aside past atrocities in peace agreements, otherwise no peace would ever be agreed.

XR is a peaceful organisation. There has undoubtedly been damage to property caused by protestors in their efforts to raise the profile of the aims of the organisation. Whilst XR would claim that the damage is done to property associated with environmental damage, which they believe is a more serious crime, there is no basis in UK law for such a quid pro quo.

It probably won't surprise readers of this blog to learn my sympathies lie with the aims of XR. By any measure, the current consumerist behaviour of our society is unsustainable and we are causing huge damage to the ecosystems of the world. Whilst I believe that it is 100% correct to oppose this, I don't think XR has always campaigned in a manner that is really conductive to achieving their aims. I am no fan of the British press, but I felt very uncomfortable seeing the empty news stands on Saturday. The problem with such actions is that it sets a very unfortunate precedent. If political groups start targetting news organisations, I fear if this is successful, there will be an escalation and the journalists we rely on to put the work in, to uncover the big stories, will find themselves at risk. I do not believe that XR will pose a threat, but there are other, far less benign groups, that would see the XR actions as a signpost.

With laws and policing, there is always a fine line and the difficult truth is that no state will ever get it right all of the time. I think the UK generally gets it right most of the time and probably more of the time than most other nations. From what I see, the Police are chronically underfunded, which is why they often don't do their jobs as well as they should. Since the turn of the century, the criminal justice system has been massively undermined by successive governments. Withdrawal of legal aid makes it impossible for ordinary citizens to effectively get justice. You may not like it when the state funds cases brought by bad people, but this keeps the system honest and ultimately gives us trust in the system. If XR is criminalised and well meaning protestors find themselves in court, without access to adequate legal advice, that would be a recipe for disaster, as we will soon find ourselves inundated with tales of injustice. In my younger years, I saw several riots first hand. One thing I soon learned is that in riot situations, the Police tend to arrest those that it is easiest to arrest. I can remember one dust up at an Anti Nazi League / Rock Against Racism rally, where protest confronted the hard right. There were several groups who were what we would say were "well tooled up". The police left them well alone, but I have vivid memories of them arresting one poor chap who had just been beaten senseless. The one thing I learned in such circumstances, was never let yourself become isolated on the periphery of the main group. There is safety in numbers. The XR protests are slightly different,  as I don't see any attempt to resist the police ( I will qualify this as there are always a criminal fringe who attend protests in the hope of benefitting from a bit of chaos and looting, but these are nothing to do with the organisation).

So in answer to my question "Should Extinction Rebellion be classified as dangerous criminals?", there are two answers I could give. The first is quite categorically no. In the UK we allow free speech, assembly and protest. We also tolerate non violent civil disobedience. It may sometimes inconvenience you, but ultimately it is what keeps our society honest and safe. To proscribe an organisation that is clearly non violent as a criminal gang would be a very authoritarian and repressive step.

The second answer is slightly more nuanced. I do believe that it is right to arrest people who are clearly breaking the law. Sensible policing during protest should mean that the police use their discretion and their powers wisely, but if protestors clearly transgress and are putting other people or themselves at clear risk, then the Police must do their job. We should also ensure that those arrested have proper legal representation, so that not only is justice done, but we can be sure its done.