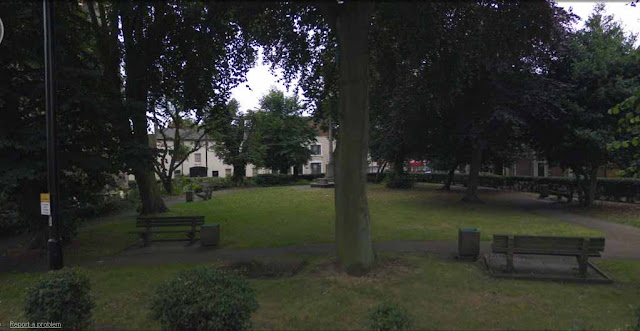 "collect no more tax than what you have been ordered to"
This was the commandment John The Baptist gave to the tax collectors when they asked how they could go to heaven. Another piece of advice :-


"be content with your wages"
Given that this blog usually concerns itself with the machinations of Barnet Council, you may wonder why we've come over all biblical today? You may also wonder why there is a picture of a nice little bit of urban green space? What has this got to do with the price of fish (and loaves)? You may wonder.

Well this is the church garden beside the Church of St John the Baptist in Chipping Barnet. I was astounded to read that the Mayor of London, Boris Johnson has awarded over £400,000 to "do this up", reported in the Barnet Times here -
http://www.times-series.co.uk/news/9177454.Church_green_investment_to__bring_buzz_back__to_Barnet/

I must confess, my first reaction was total incredulity. We've seen sheltered housing wardens cut to save this amount. Church Farmhouse museum closed and is under offer for sale. We've seen childrens centres cut. We've seen the grant cut to the Barnet Museum, which is virtually next door. We've seen Friern Barnet Library under threat of closure. All for less than this amount. We've seen all manner of charities, doing fantastic work, losing their grants or having them cut. Trifling amounts compared to this huge sum, but amounts that make a huge difference to all manner of lives in crisis.

So why has this perfectly adequate church garden been given nearly half a million quid for a makeover? Over to our favourite councillor - who gives the game away (to quote the article).


Councillor Brian Coleman, London Assembly member of Barnet and Camden, said: “This investment is excellent news for Chipping Barnet. It shows that Boris was as good as his word when he said in 2008 that he was not going to be just a Zone 1 Mayor.”

Yup, there is an election next year and the Tories are chop, chop chopping budgets left, right and centre. Boris and Brian have done NOTHING for Barnet up until now. Can it be a coincidence that all of  a sudden, they're splashing the cash and Brian Coleman, who is seeking election next year is running around claiming the credit.

I rather like St John The Baptist and his philosophy. He had a rather inclusive view of heaven. Anyone could come in so long as they did their job, played their role in society and didn't take the piss.

What would he have made of Councillor Brian Coleman, who earns over £114,000 a year for a string of part time jobs. Who charges thousands of pounds for taxi expenses back to the taxpayer. Who lives in a flat owned by the Methodist Church on a controlled rent. A flat designed for families on low wages?  Given all the free dinners Brian Coleman has munched his way through,  what would St John, who famously lived in the desert on a diet of locusts and honey have made of Coleman and his plutocracy?

Barnet isn't short of schemes and charities that could make a power of difference for £400,000. Sadly Brian Coleman and Boris Johnson aren't interested in these, as they won't give photo grabbing headline opportunities.

Whether or not you've heard of St John the Baptist or agree with his teachings, can anyone in this day and age think £400,000 to do up a perfectly adequate Church Garden is a good way to spend public money. Is there any way that such extravagance at a church named after a man dedicated to a lifestyle of poverty, can be seen as anything but two fingers up at one of the most important biblical figures? Especially when it is purely being done as a cynical pre election bung for one of the wealthiest parts of Barnet.

There is nothing worse than a politician trying to bribe us with our own money. But Gordon Brown makes Boris look like a rank amateur at this game. How about giving the money back to the taxpayers from whom it was stolen, in the form of lower council tax charges next year? That’s what real Conservatives would do.