Boris 2012 - The most stupid political leaflet ever?

I got this leaflet through the door today, from the Mayor of London. Have I ever seen a more ill timed and stupid leaflet? Let me think about that one. What has been the big London story this week? Riots & looting. Guess what Boris says in the leaflet "By working closely with Brian Coleman, we have so far delivered 75 more police officers on your streets and cut crime by almost 13% in Barnet and almost 14% in Camden". On the other side of the leaflet, Boris proudly boasts of "a fall of 20% in robberies". Hmm, I wonder if the figures include last weeks crimes?

Ok Boris, let's just take this really easy. On Monday night, the streets of London were nearly completely out of control. Were there adequate numbers of police? No, of course there weren't, that's why we have Welsh bobbies patrolling the streets of London. That is why tonight, one of my friends couldn't play five a side football, because all of his leave has been cancelled. If Boris thinks that sending a leaflet boasting about his successes preventing crime, in a week when many London landmarks have gone up in flames and many shops have been looted bare, is a good idea, we have to ask whether he is up to the job  (It is great to see that he's chosen to use Brian Coleman as a big vote winner in Barnet - at least everyone knows to blame him for the riots as well).

As I read the leaflet, was I the only person in London who got this who thought "Mate, you should be apologising for losing control of the streets for three nights, not crowing about what a marvellous job you've done". A couple of the guys I play football with are Conservative voters. They told me they'd read the leaflet in total disbelief. Surely Boris has someone on his team with enough savvy to say "This ain't a great leaflet to send out right now".

Anyway, just in case you weren't lucky enough to receive it, here it is. Click on the images for a more readable version. 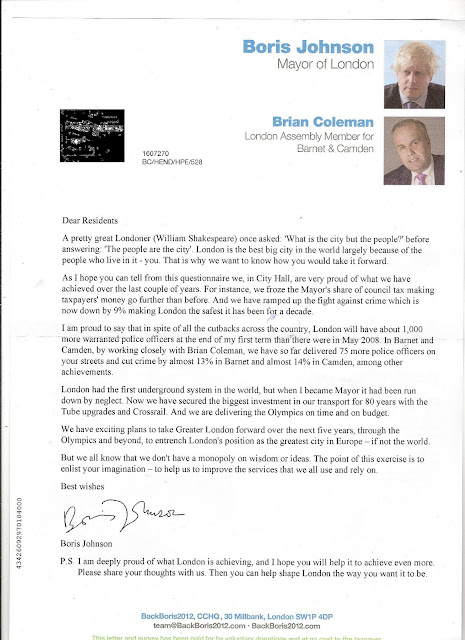 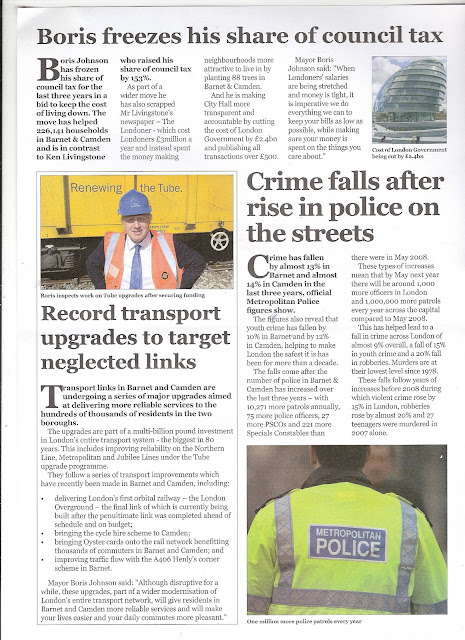 The only rational explanation I can think of for putting such a stupid leaflet out and sticking Brian Colemans mug next to his, is that he wants to lose the mayoral election, so he can go back to the Commons and take "Dave" Camerons job? If anyone has a better idea what he's up to, please leave a comment

Maybe they are going to support each other in the forthcoming elections.

just lets hope he doesn't want to lose the mayoral election cos he's starting his campaign for 10 Downing St, then we will really be up the proverbial without a paddle... silly man