I was not particularly an opponent of the Saracens proposal for Copthall Stadium. The stadium was derelict and needed investment and whilst I felt Barnet Football Club should have been given first refusal as they are local and well established, I felt that Saracens was probably the best option likely with our totally anti football council. I have now changed my opinion. The reason? I hate it when we are lied to and conned into supporting proposals on false pretences.

When the plans for a huge CPZ, covering over 3/4 of Mill Hill was announced, I was shocked. Even more so by the totally oppresive timings of this from 1pm to 6pm on match days, even though Rugby matches last 80 minutes. The truth is that Saracens RFC distributed a leaflet throughout Mill Hill claiming that there was no need for a CPZ. It said that the council didn't want one, the police didn't want one and they didn't want one. This is the biggest porkie that has been told in Mill Hill.

If Saracens cannot conduct their business without telling the truth, then as far as I'm concerned they are not welcome in my neighbourhood. I will be writing to the council, to demand that they annul the planning permission, as it is clear that local people were mislead. If the CPZ had been explained properly, then the local opposition would have been overwhelming.

Here is Saracens own leaflet. How does it feel to have been conned? This leaflet was distributed all around Mill Hill prior to the planning hearing. Check point no 2 it says "The truth is .... nobody believes a controlled parking zone is required, not the council, not the police and not Saracens. It is not on the agenda because we believe the match day travel plan will work." It is now clear that the Police, the Council and Saracens believe it won't. If this is the case, the surely the planning permission is invalid as this was based on the fact that the plan was robust. Or like everything in "One Barnet", will private companies tell a stack of porkies to get their way and then shaft us. It is sad to see the local papers have said nothing. Is this because they expect hufe advertising revenues from Saracens? I can think of no other explanation. 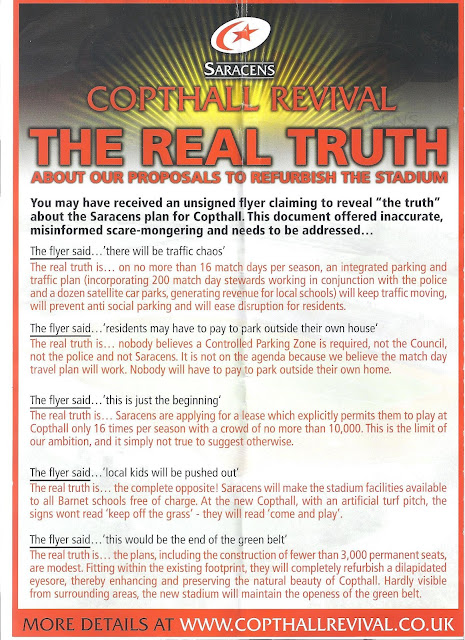 How do millionaires make money ? ethical business or working a con

Always possible with our Town Hall and Senior Government Officers not on PAYE somnebody with the Planning Portfolio had a deeper pocket. One more reason to vote the Tories out but would Labour give the residents parking permits if elected