Last Tuesday, Brian Coleman, a senior member of the Conservative administration described the public gallery at a full meeting of Barnet Council as "sad, mad and a couple of old hags". The use of the term "Old Hag" is clearly a term of sexist abuse, used in its crudest form to denigrate a subsection of the female population. Mr Coleman clearly thinks that using such language to denigrate members of the public is fine. Some of us don't.

I had a brief chat with Dr Julia Hines, one of the people labelled an "old hag" by Brian Coleman this morning at a meeting at Friern Library. Julia is the chair of Age UK Barnet. She was attending the full council meeting as the policies of Barnet Council will affect the people who she represents and it shows great commitment to the community that she makes the effort to attend such meetings. Julia is very competent and able person. She is highly intelligent and very much on top of her brief. If I ever need to know any information related to issues with Barnet Council policy towards the elderly, she is the first person I ask.

Over time I've got to know Julia reasonably well. She is sociable and extremely good company and often will join the small cabal of bloggers, journalists and councillors (from all parties) who have a couple of refreshing sherbets after council meetings etc. As with the rest of the group (which includes another of the "Old Hags" Mrs Angry), we chew the cud on the meetings, share the odd joke and generally put the world to rights.

Over the course of my life, I've seen many instances where very good and capable people have been bullied and picked on. This has caused them all manner of upset and damage. For many it has deterred them from undertaking many things in life they enjoy. I've been reliably informed that even Councillor Coleman was the subject of rather nasty bullying as a youngster and this may account for his desire to be so obnoxious to other people.

One thing that is crystal clear to me is that if you are female and you are in the public spotlight, you will be subject to sexism and sexist abuse. I did a little bit of research and I found this picture 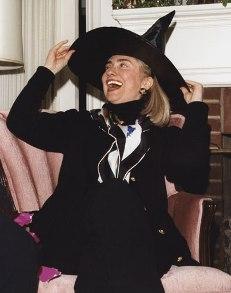 This is probably the most powerful woman in the world, Hillary Clinton having a bit of a laugh dressing up in a witches hat. I saw the picture and thought "Nice to see a woman who is confident enough to have a bit of fun". Then I noticed the URL of the website. It is http://hillaryugly.com/ - I was rather surprised to see such a site, not least because Hillary Clinton is actually not physically ugly. What was even more revealing was the text on it, which said :-

HillaryUgly.com
Beauty is only skin deep.  Ugly goes to the bone!
Not just another collection of hideous pictures of the Clintons' and friends.  True, Hillary Rodham Clinton is one ugly old Hag, but, her personality and ideas are even scarier than her looks.

So it seems that Mrs A and Dr Hines are in good company. In the eyes of some (again rather immature right wing) commentators, Hillary Clinton is an ugly old hag. Of course, the second part of the last statement really gives the game away. It is her "personality and ideas that are even scarier than her looks".  Now there are many American politicians who have ideas and personalities which are scarier than their looks. The thing is that when they are right wing males, they would not be victims of sexist and demeaning abuse.  One has to conclude that the scariest thing for the creaters of this website is the fact that Hillary Clinton has a female personality and that she has ideas of her own, because she is a very intelligent person. We have to conclude that the concept of an intelligent and articlate female with ideas of her own, scares the shit out of some boys.

I believe this same issue goes to the heart of what seems to scare Brian Coleman about Dr Julia Hines, Mrs Angry and just about every other articulate woman who disagrees with his politics in Barnet. I have sadly concluded that he resorts to personal attacks because he knows that he will lose an intellectual debate and for a clear mysoginist such as Mr Coleman this would be simply too embarrassing.

The internet has given rise to a new type of dysfunctional personality, the "sexist internet troll". They seem to gain energy from making sexist comments, be it by setting up sites such as HillaryUgly.com or perhaps even more sadly by leaving nasty comments on  local paper websites. We live in a democratic country where freedom of expression is allowed. Should we legislate against sexist language by public officials? Should we take sanction against the internet trolls? That is a very difficult question to answer, as I generally am not a fan of censorship. The other side of the coin is that if women are deterred from entering politics or public life because they will be ripped apart for their looks and have their confidence undermined.

It is clear that institutions and establishments which enact zero tolerance policies towards all forms of bullying behaviour are more successful and better run for it. If we follow the Coleman logic to it's conclusion, then we would in effect exclude everyone who doesn't fit his ideal of physical perfection from Barnet Council. The truth is that people who are picked upon and victimised eventually get fed up with it. If his behaviour puts off capable females from positions such as chair of Age UK Barnet, then Brian Coleman has done a huge disservice to public life in Barnet.

I have been deeply disturbed by this whole incident. Not by the behaviour of Brian Coleman, which I know to be appalling. It is the way that his colleagues seem to be 100% behind such behaviour. I believe that Julia Hines deserves better than this. I believe that we all do. I believe that there is no place for sexism, racism or any other type of bullying behaviour in the offices of Barnet Council and I'm saddened that the people in charge seem not to care about the actions of their rather discredied colleague

Can there be a higher accolade than to be labelled "old hag" by an old queen?

Following his arrest yesterday is the old fag about to become and old lag?