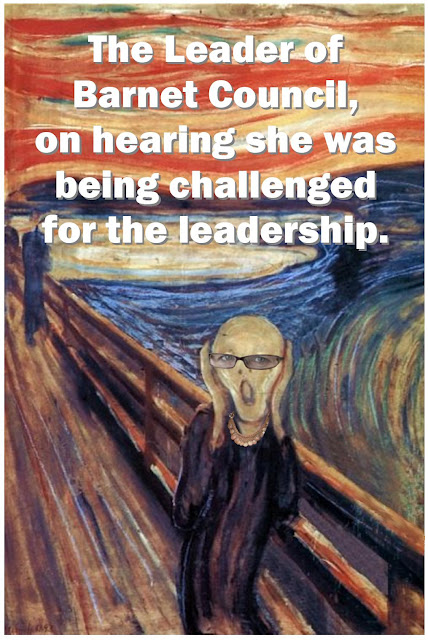 Hendon ward Councillor Mark Shooter, today announced a challenge to the Leadership of Barnet Council. Whilst Councillor Shooter initially voted for the rise, he has clearly thought about it and seen sense.  The Barnet Eye is proud to say that we have played a part in his decision, by keeping the story rolling and helping Ex Councillor Dan Hope launch "The Barnet Declaration" which Councillor Shooter appears to have adopted.

Given that I am not and never have been a Conservative and it is possible that in a narrow party political way, keeping a fatally damaged Lynne Hillan may be good for the opposition, it would be easy for this blog to stand back and say "they are all the same old Tories, they are all just as bad as each other".

I can't do that. It would be completely dishonest and would not be in the best interests of the people who live in my home town.

The Tories have a large majority and are in charge at a time of extreme challenges in public finance. Lynne Hillan championed the destruction of the sheltered housing warden network. She has shown herself time and time again to be a callous operator who cares nothing for the most vulnerable members of society. She didn't have to champion the destruction of sheltered housing, she didn't have to champion the huge rises in allowances for herself and her cronies. We saw both sides of her in these two actions and they are not pleasant. Having campaigned every single day for a month for a change to this policy, it would be hypocritical and dishonest to miss the opportunity to kill it dead in its tracks. 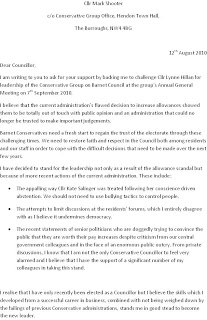 Mark Shooters letter to his fellow Tories is reproduced left (click on this for a readable version). Shooter cites the following reasons for standing.

•    The appalling way Cllr Kate Salinger was treated following her conscience driven abstention. We should not need to use bullying tactics to control people.
•    The attempts to limit discussions at the residents’ forums, which I entirely disagree with as I believe it undermines democracy.
•    The recent statements of senior politicians who are doggedly trying to convince the public that they are worth their pay increases despite criticism from our central government colleagues and in the face of an enormous public outcry. From private discussions, I know that I am not the only Conservative Councillor to feel very alarmed and I believe that I have the support of a significant number of my colleagues in taking this stand.

I don't expect Mark Shooter to be the answer to all of my dreams for Barnet. I just think he'll be significantly less bad for us all. The Lynne Hillan regime have let the people of Barnet down badly. They have united just about everyone against them and they now have caused an open revolt within their own councillors. As I'm not a Tory, I don't have a vote and Hillan would probably use my endorsement against Mark Shooter, I'm not going to say anything else apart from this. Nothing would be better for Barnet than for Lynne Hillan to get the sack. I wish Mark Shooter the very best of luck. Given the record of the rest of Barnets Tory councillors he's going to need it.

The fact that the campaign, spearheaded by the Barnet Eye has made one Conservative Councillor see sense is a huge victory. If another 18 of them can be persuaded, it will be a great day indeed for the citizens, because it is their pressure which has made this happen.

Good to see someone willing to stand up and be counted.

The People of Barnet and Mill Hill are with you on this.

A great day for (all) the Barnet blogsphere! With a nod to the local journalists, who have also helped.

You surely have been a considerable help is allowing Mark Shooter to break cover.

The question is: will he win? Is he likely to keep any of the money-grabbers around Lynne in his Cabinet? If not, they may see it as THEIR one and only chance, and call in favours.

Query:
What would Brian's income be, if he made Leader, and with the full amount paid?

In total (that is, with all his 100-hours-a-week worth of "public service"), does he - at last - outdo the Prime Minister?

I applaud Councillor Shooter for making this challenge and showing that there are principled human beings about but, I'd like to know what makes him different to his two unprincipled ward colleagues whom, usually represent their own class while the rest of the constituents have had to go to West Hendon, Colindale or Burnt Oak wards for representation over the past few years?

Roger - feel free to remind us all of the BBC interview of Lynne, regarding EasyCouncil, if you have the reference.

(Always good for a laugh.)

What's the word on the street about her possible replacement? A good egg?

Whoa: hold on boys, just take a moment to think ... Before we all get carried away, can we take a moment to remember that Shooter did actually take part in this vote and could have voiced criticism far earlier than this stage when a potential political opportunity has arisen for him.
Secondly, and more importantly, there is need of clarification of his personal and business background before we can judge how suited he is to the job. He has only been a councillor for threee months or so, and cannot have much experience of local government. What is his history? Check it out and then make your own mind up.

... and there is also the possibilty that he is only a stalking horse in an effort by someone else to force a leadership challenge. Excuse my cynicism: it is best to be cautious with this bunch, despite the fervent wish of all of is to see change for the better.

The Shooter Multi Strategy Fund Limited, launched November 1st 2004, is a relative value fund seeking to generate consistent absolute returns in a range of market conditions. Historically the firm has traded in equity (US and Europe), FX and interest rate markets (G10) with a sizeable allocation to equity volatility and quantitative strategies.

Rising Stars - Financial News Online
www.efinancialnews.com,
16 June 2006
41, Mark Shooter, Exciting actuary. Founder, hedge fund manager, Shooter Fund Management...
Break through: Last year, Shooter launched the eponymous Shooter multi-strategy fund, a volatility arbitrage fund focused on European and US equities.The fund has produced a steady, and impressive, 1.7% a month for investors since launch.Shooter trained as an actuary at Watson Wyatt before joining UBS O'Conner as an options trader.He tested his trading approach for eight years under the umbrella of the Kyte Group.
Mentor: Few traders take advice, and Shooter is no exception.
Firepower: Shooter closed his fund to new investors at about £200m, not wanting assets to dilute performance.
Potential: According to investors, Shooter has the potential to build one of London's top hedge fund families.His willingness to restrict capacity in his funds is particularly encouraging.The multi-strategy fund focuses on exchange-traded front month derivatives, which are transparent and liquid.As such, the approach has the potential to be exported to other markets, according to investors.Shooter has expanded the strategy to FX and interest rate volatility markets and intends to launch a second fund, and open the existing fund to new investors, in the first quarter of 2005.

Global Foundation for Sustainability of Billions of Minds
www.billionmindsfoundation.org,
22 Feb 2008
With over 600 million US dollars under management, award winning Shooter Fund Management LLP, founded by Mark Shooter is a fund specializing in volatility arbitrage.

Comment:
Well, he's made his bundle - so he won't want to greedily grab it from Barnet residents, unlike Our Lynne and the rest of the cabinet!