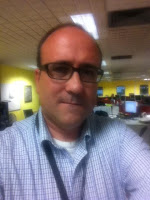 Like many of you I am a regular daily commuter on the Thameslink line from Mill Hill Broadway to Central London. I share your frustration at the constantly cancelled trains, short formations and gross overcrowding that characterise our local train service.

It wasn't always like this. If you look closely on the wall next to the station entrance you can see a faded British Rail era timetable poster. This timetable dates from the Bed-Pan days, before the Thameslink service was introduced in 1988. What is remarkable that even back then Mill Hill Broadway had Six trains an hour at peak times, four stopping and two fast. The fast trains were non-stop to St. Pancras and later to Kings Cross Thameslink. Compare and contrast with today's five trains at peak times and you begin to wonder what real benefits did rail privatisation actually bring to Mill Hill Commuters?

The service began to change for the worse when First Capital Connect took over the previous Govia Thameslink franchise. We lost our fast trains to Kings Cross and to make matters worse, went down to four stopping trains per hour. Only at a later stage was the extra fast train to West Hampstead at peak times introduced. Now we are back at full circle again; Govia have reclaimed the Thameslink franchise but significantly have not made major changes to the Timetable they inherited from First. As a result, journeys on the Thameslink to Mill Hill Broadway are characterised by gross overcrowding and short formations. Coupled with a shortage of drivers qualified to drive the remaining Class 319 trains that Govia Thameslink Railway (GTR) provide for the Thameslink Metro service that stops at Mill Hill, there is a real sense that MIll Hill Broadway is more of a nuisance than an asset for Thameslink Management.

How many times have you stood on a Monday morning at Mill Hill Broadway only to be told your trains are cancelled while fast trains from St Albans and Bedford whizz past on the fast lines? These trains could stop at Mill Hill. We have 12-car capable platforms that could accommodate the longer and newer trains that First Group and now GTR don't allow to stop at Mill Hill. Indeed I worked on the Thameslink Programme and took part in the decision to provide 12-car platforms at our station. What a pity these platforms are currently going to waste.

In my capacity as Chair of the Mill Hill Residents Association I have taken part in meetings with senior Thameslink management and asked them to consider stopping fast trains when there are delays to the existing service. I have asked them to provide an extra train at peak to eliminate the 20 minute gap that occurs at peak times by allowing the trains that are fast from West Hampstead to Elstree and vice versa. In both cases Thameslink have refused to budge, citing the tight timetabling needs of the line.

It is obvious to me that Thameslink Management place far more value on their long distance commuters than the local London commuters. That is why we don't get the fast, modern trains that the St Albans and Bedford commuters get. Instead it's jam tomorrow and we will have to wait for the new Class 700 trains that are due to enter service in 2018. These trains will be running in 12 car formations as well as 8 cars, and they will have more room for standing compared to the old Class 319 trains. In addition we will get 8 trains an hour after 2018. Great, but what about in the meantime?

We need a better deal; I welcome the recent announcement that the Thameslink franchise is to be handed over to Transport for London (TFL) in 2021 when the franchise expires. However 2021 is a ridiculous time to wait for a better management team. Better to cancel the Thameslink franchise now and get TFL on board to start running the railway properly and in the interests of passengers. Some may wonder if this would affect the Thameslink Programme. Not a bit of it. The Thameslink Programme is being delivered by Network Rail and the DFT. Govia Thameslink may be the current Train Operating Company on the route, but they do not take part in the delivery of the project.

As a St Albans commuter who also feels your pain as a fellow person being held to ransom for a sub standard service by both FCC and now Govia I can tell you that it's almost impossible to board a fast train from St Albans as they are already full when they arrive. As such, I think it's more to do with the volume and size of trains not being anywhere near fit for the number of tickets they sell. We ask the same thing. Why are there no fast trains starting from St Albans if they're already full when they arrive! Perhaps if they did they could stop at Mill Hill...