Have you looked at the London Underground Map for the Northern Line of late?

On the south of the river, the line has sprouted a little spur to Battersea Power station. Trians to Battersea run from Mill Hill East, the little spur at the Northern end of the line. It is interesting to note that if you start the journey at Mill Hill East, you will be starting at the oldest station on the Northern Line and finishing at the newest. The Mill Hill East branch was part of the Edgware, Highgate and London Railway. The Edgware section opened on the 22nd August 1867. This line diverged from what is now the Northern Line at Highgate and headed down to Finsbury Park and Moorgate. The Great Northern Railway and then the LNER took over the service. It was a mainline railway, with goods yards for freight at most stations. In 1939, the station shut as a mainline rail station and reopened as the Northern Line. Mainline freight trains served the line until 1962. One of the major income streams of the line was the large gas works at Mill Hill East. This processed coal and made town gas. Locals would buy coal and coke from the depot. There were large gasometers on the site. This picture of the site in 1926, from the Mill Hill Preservation Society website gives some idea of the scale of the works

A Pathe Film showing city workers breaking the strike at the Gasworks is a fascinating reminder of times gone by. The Mill Hill gasworks was a hugely important part of our industrial heritage. Without power, there would be no mass development. Guest blogger Richard Wilkinson contributed some amazing memories of the gasworks in one of his blogs /memories-of-lost-mill-hill

Mill Hill smelled very different in that bygone era, especially in Winter. Coal was king.  These days, if we are cold, we simply turn up the heating. My memories of growing up are memories of being cold and gathering around coal fires to warm up in the living room, or around the stove in the kitchen. One of the lessons of the day was that there is a cost to being warm. As kids, we'd be despatched to collect coal from the merchant at Mill Hill East. We had an old pram that we'd load up. You could get the coalman to deliver, but this cost money, so when times were hard, you'd collect it from the depot, for us this was by the gas works in Mill Hill East. If there was a sudden cold spell and you ran out of coal, then you faced a long walk, usually in the rain or snow to get a top up.

The railways and gasworks were what lead to the development of Mill Hill in the Victorian era and the early part of the 20th century.

The gasworks closed, this picture on the MHPS website shows the gasometer being dismantled.

The Gasworks site has now been completely redeveloped. There is a large housing estate, a Waitrose and a Virgin Active gym on the site. I have struggled to find a single piece of the old industrial site left.  The Borough of Barnet has an amazing industrial history. Sadly, the local authority see this as something to be smashed to smithereens and onbliterated. Many of the residents living on the site of the Gasworks probably have no knowledge of the previous use of the site and it's importance in the development of the area. Some people may say "What aesthetic value do old gasometers and industrial buildings have?". I'd suggest that you have a look at the redeveloped gasometers at Kings Cross, as to the rest of the site, that little spur to the south of the river gives a clue. Yesterday, I did the pilgrimmage from Mill Hill to Battersea.

The coal trains that supplied the 10,000 tons that the station burnt a week passed through Mill Hill on the Midland mainline, past my back garden. They would branch off at Cricklewood, down the Dudden Hill Line, linking up with what is now the London Overground, to south of the River and Battersea. I had a query on the Robert Elms show and I was delighted to learn that the iconic 60's film Alfie has one of these coal trains in the background of one such scene.

We made a day of it. The new station at Battersea is quite nice and shiny, unlike most of the line. 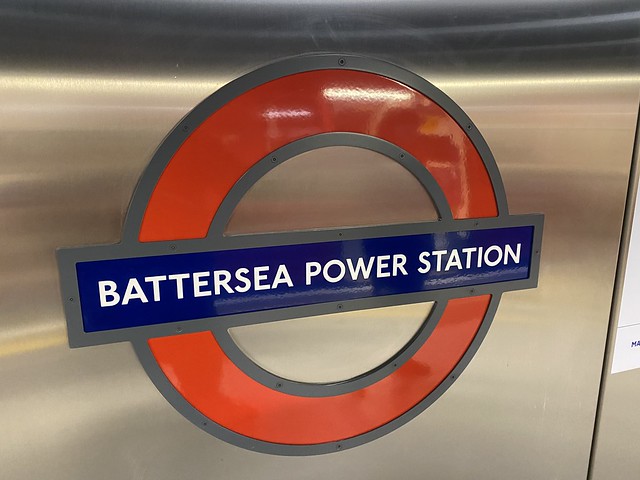 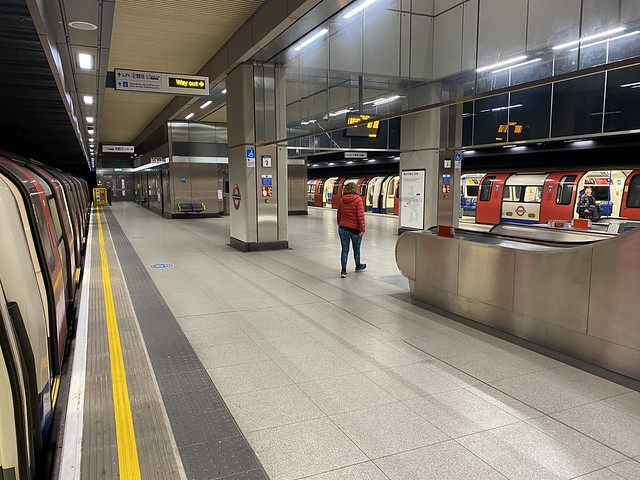 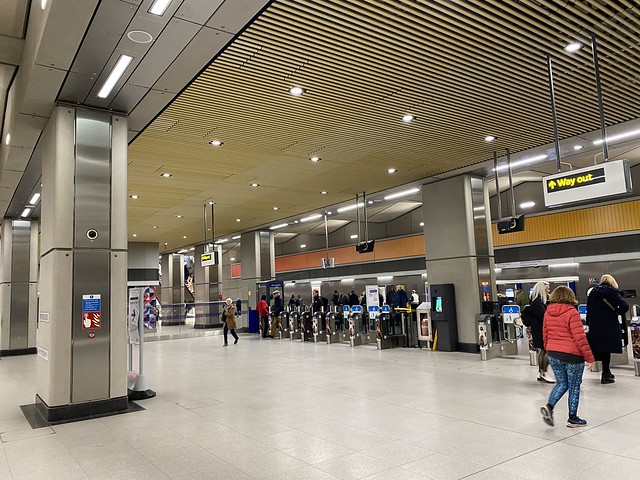 When you emerge from the station, you are confronted by the impressive site of the Power Station and the new flats. 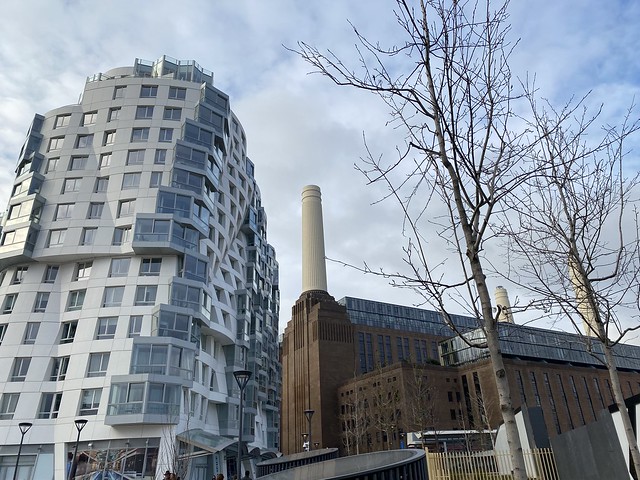 The last time I had visited the Power Staion was as a naughty teenager in around 1975. Myself and a few mates got a red bus rover and spent the day touring London causing naughtyness. I can recall visiting the Powerstation. We found a hole in the fence. It was dirty, smokey and very industrial. We were eventually chased our when someone spotted us. There was all manner of old industrial artefacts lying around and everything was covered in soot.

Now it is spotless. As we approached, the scale of the magnificent building became apparent. 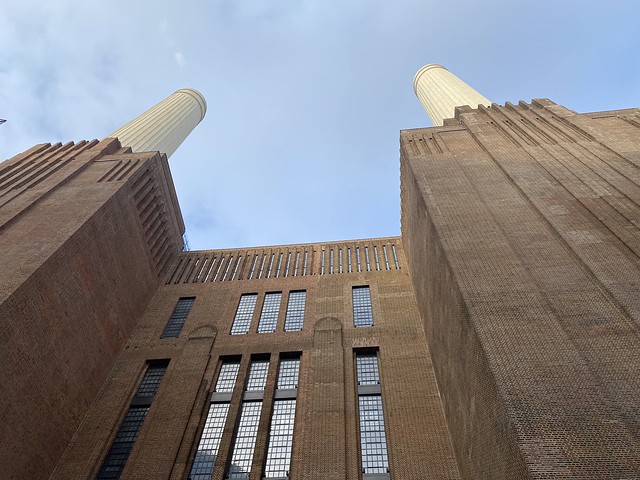 The isnide is now quite glitzy although many of the units have not been let yet. 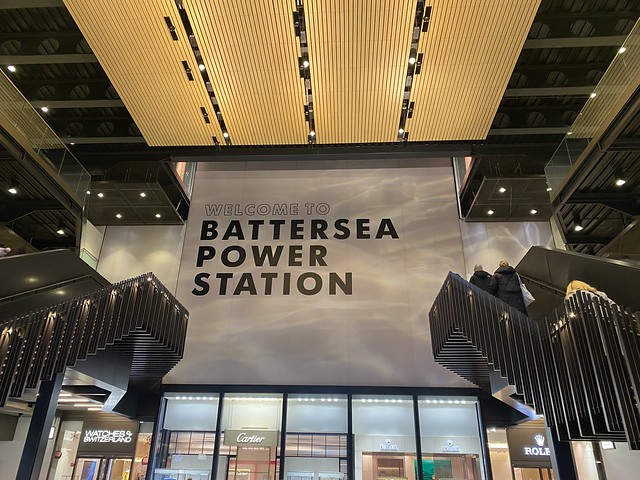 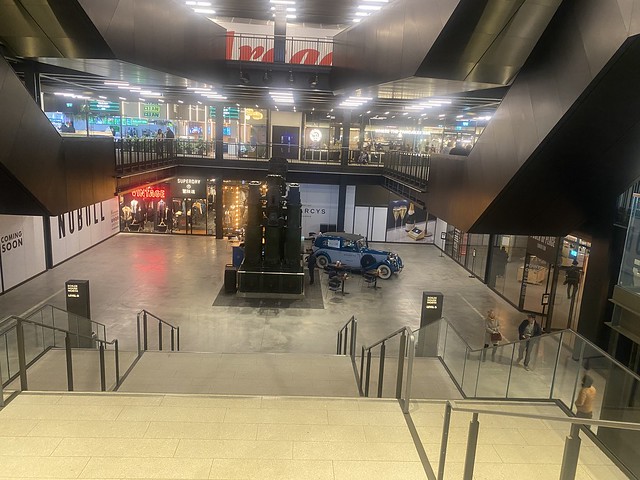 MAny of the original details have been retained and incorporated into the new use, which is wonderful 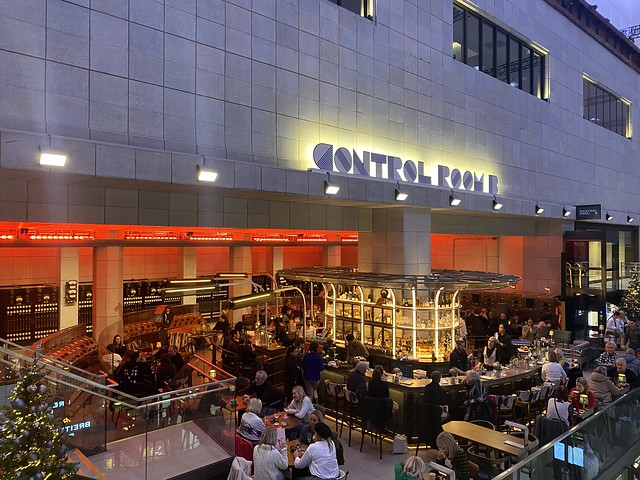 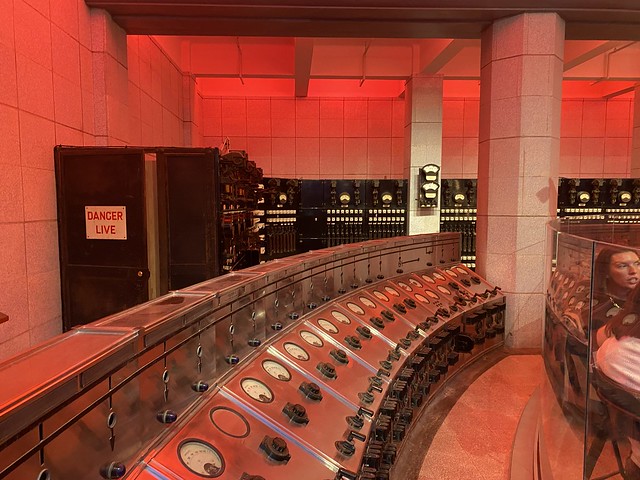 We paid the £20 and took the elevator up to the top of the Chimney, with it's panoramic views of London. I love such sights, so for me it was money well spent. 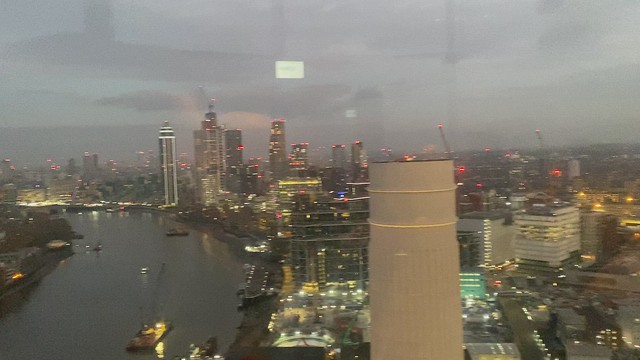 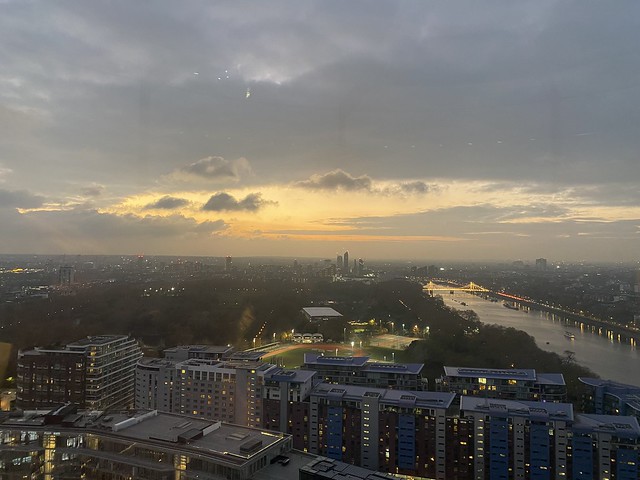 Outside there is a small market, skating ring and other small funfair rides, ideal for smaller children 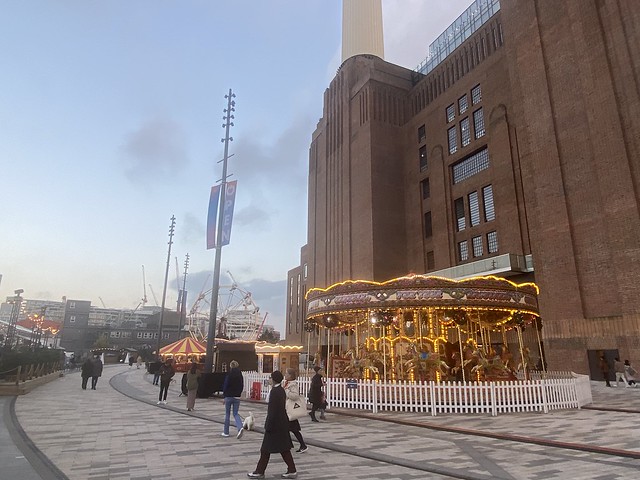 The whole area was rather busy, which was good to see. There are shops, bars and restaurants, which were busy. We had a pleasant couple of glasses of wine at Vagabond which I rather enjoyed. The whole journey to/from Mill Hill was less than 45 minutes door to door,

What struck me when I visited Battersea was how it was an exercise in how to do a development well from an architectural and cultural perspective (although the number of affordable homes leaves a lot to be desired). They have maintained the history of the area, they have added new transport links, with the station on the Northern Line and they have funky new designs for the flats. There are things for children to do and you have a feeling of place.

The development in Mill Hill East is quite the opposite. The one pub near the station has been turned into flats. The industrial heritage has been obliterated. Every sign of the gasworks has gone. The service from Mill Hill East is patchy, despite a plan for nearly 2,500 new homes in the area. Like just about every development in the Borough of Barnet, it is faceless, bland and generic. There is so much to learn from how the developers of Battersea, Kings Cross and other such sites use the local buildings and heritage to add value to the area. You may well say that "Mill Hill East gasworks was never an iconic site in the way Battersea Power station was". My response is that how will anyone know how important the manufacture of Town Gas was in the development of London if we destroy every trace that it ever existed. If they'd maintantained a few buildings and repurposed them, maybe Barnet would be somewhere that people actually considered worth a visit and interesting.  You may ask why I haven't mentioned the Inglis Barracks and the Military History of Mill Hill East in this episode. The reason is that I am concentration on the differing fates of the power industry legacy at both sites. The military history is a different story completely.

You may have noticed that all of the pictures etc of Mill Hill East are historic and all of the pictures of Battersea are contemporary. Why? Well I wanted to make the point that it is well worth a trip to Battersea to see the Powerstations and lean of its history. If you want to know anout Mill Hill east, you'll have to read a blog.

And we finish with some music. The photo of the front cover of Quark, Strangeness and Charm was taken in the control room of Battersea Power Station. Huw Lloyd Langton of Hawkwind was a Hendon resident and recorded two albums at Mill Hill Music Complex