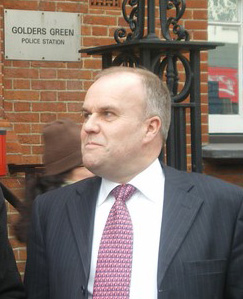 As you might know, Barnet Council appointed Councillor Brian Coleman as supremo for roads in Barnet after the last election. Mr Coleman immediately announced that his priority was "Roads, Roads, Roads".

So how has Mr Coleman been doing? One of Mr Colemans first pledges was to fix all of the Boroughs potholes by October (ie Now).Has Mr Coleman lived up to his promise? Well this week, The Barnet Press  berated Brian Coleman for refusing to reveal details of Pothole repairs.

The Press stated that Mr Coleman was unable to explain his reasons for blocking the request. Anyone who knows Mr Coleman will be rather surprised at this reticence from someone who is normally only too keen to share his opinions.

The Full story is here.

Not a good sign, however there is an easier way to find out than asking Mr Coleman. Barnet Council has helpfully set up a website to report and monitor problems such as potholes. It's actually a rather useful website and it's called :-

So I thought I'd have a look. Are there any potholes left in Barnet?  I went to the "all reports" page on the website. Sure enough, there were plenty of reports, but then I noticed something even more interesting. If you scroll down on the reports page, there are reports with the title "Older reports, state unknown" - try it yourself here - http://barnet.fixmystreet.com/reports/Barnet -  I was staggered by this. Guess how many reports fitted into this category? I counted over 1,300. Here's just a couple of examples, which Barnet Council clearly haven't bothered to check out.

There are literally hundreds of these reports, which it seems Barnet haven't even bothered to look at. It strikes me that the real reason that Brian Coleman won't reveal details is because he hasn't got a clue. Is it really beyond the wit of the man to check this website out and berate his officials if they don't fix the problems. When Coleman took over as transport supremo for Barnet, no one forced him to say that his priority was "roads, roads, roads". No one forced him to say that all of the potholes would be fixed by October. What sort of person makes such statements, without checking whether the promises were feasable? Having made the promises, what has he done to actually check on the progress. He is clearly too lazy to bother checking the Fixmystreet site, which is a simple way to tell. Sadly for the Council Tax payers of Barnet, Mr Coleman has been made to look like a clueless idiot by his own council website. As ever, the Barnet Eye cordially extends an invitation to Mr Coleman to write a guest blog explaining why he is incapable of delivering what he promised. While he's at it, maybe he'd be so kind as to tell us why Barnet Council ignores so many cases where public spirited residents report problems. I think the Fixmystreet website is an excellent resource. It is actually a great example of David Camerons idea of "big society", where citizens contribute to making the council run efficiently. Sadly it seems that Mr Coleman is more interested in BIG DINNERS than big society. It seems that when Mr Coleman says "I haven't got a clue", he's being extremely honest.

Rog: as I have been -oh the shame - censored by the Barnet Council Facebook dictators for mentioning the unmentionable councillors allowance rise, my friend Justitia asked the questions about potholes that were considered so impertinent by Mr Toad. Read the answer from Barnet on the council's FB page which claims the project is on course to be finished by the end of this month, and see what you make of it.

That's 33.3% more roads from Brian than you insinuated.

Presumably, as Lead Cabinet Member for Transport, he has made sure that this is also the prority of Barnet Council. That is hardly likely to mean any better First Capital Connect services, then. I wonder if he means "Cars, Cars, Cars, and Cars" or if buses get a look in.